Tanks and bodies mark path of Russian retreat near Kyiv 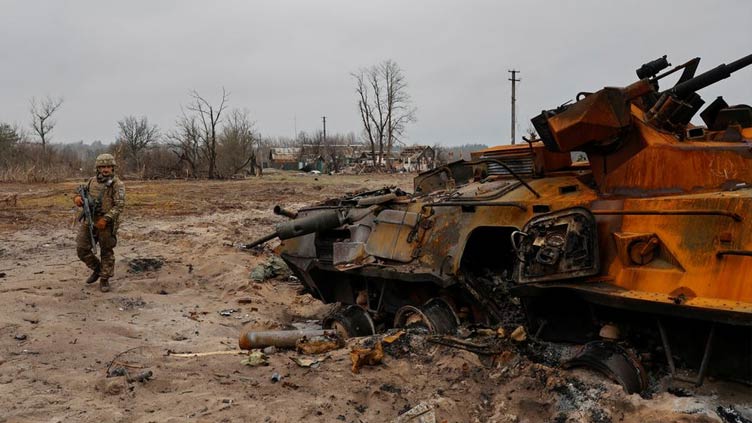 Tanks and bodies mark path of Russian retreat near Kyiv

Putin sent troops on Feb. 24 for what he calls a "special operation" to demilitarize Ukraine

DMYTRIVKA (Reuters) - Ukraine recaptured more territory around Kyiv from Russian soldiers who left shattered villages and their own abandoned tanks as they moved away from the capital, while a disputed cross-border strike in Russia complicated peace talks on Friday.

In the hamlet of Dmytrivka to the west of the capital, smoke was still rising from the wrecks of armored vehicles and the bodies of at least eight Russian soldiers lay in the streets, Reuters correspondents saw. read more

"From one side we were hearing the tanks shooting at us, and from the area of Bucha was a massive mortar shelling," said resident Leonid Vereshchagin, a business executive, referring to a town to the north.

Ukrainian forces went on to take back Bucha, its mayor said on Friday in a video that appeared to be filmed outside the town hall. The advances followed several days of Ukrainian gains around Kyiv and in the north.

In southwest Ukraine, anti-air defences thwarted an attempted attack on critical infrastructure in the Black Sea port of Odesa, the Ukrainian military said. Reuters could not immediately verify the account. read more

Odesa’s governor, Maksym Marchenko, said three missiles had hit a residential district, causing casualties. He said the missiles were fired from an Iskander missile system in Crimea, the southern Ukrainian peninsula annexed by Russia in 2014.

President Vladimir Putin sent troops on Feb. 24 for what he calls a "special operation" to demilitarise Ukraine.

The West calls it an unprovoked war of aggression that has killed thousands, uprooted a quarter of Ukraine’s population and brought Russian-U.S. relations to their worst point since the Cold War.

Aiming to lower nuclear tensions with Russia, the U.S. military has canceled an intercontinental ballistic missile test that it had initially aimed only to delay, the Air Force told Reuters. read more

In the Russian border city of Belgorod, a logistics hub for its war effort, Moscow said Ukrainian helicopters struck a fuel depot, causing a huge fire. Ukraine denied responsibility for the incident, the first of its kind in the five-week-old war.

Hours after the blaze began at the oil depot, an eyewitness reached by telephone in Belgorod, who asked not to be identified, said aircraft were flying overhead and there were continuous explosions from the direction of the border.

"Something is happening. There are planes and constant explosions in the distance." Security camera footage showed an explosion following what appeared to be the flash of a missile. read more

"Ukraine is currently conducting a defensive operation against Russian aggression on the territory of Ukraine, and this does not mean that Ukraine is responsible for every catastrophe on Russia’s territory," said ministry spokesperson Oleksandr Motuzyanyk.

A Russian threat to cut off gas supplies to Europe unless buyers paid with roubles by Friday was averted for now, with Moscow saying it would not halt supplies until new payments are due later in April. read more

Russia says the southeastern region of Donbas, where it has backed separatists since 2014, is now the focus of its war efforts. The besieged and bombarded Azov Sea port city of Mariupol has been its main target there.

Conditions on Friday made it impossible to go ahead with a plan to evacuate civilians from Mariupol, where tens of thousands are trapped, the International Committee of the Red Cross said.

United Nations aid chief Martin Griffiths will travel to Moscow on Sunday and then to Kyiv as the U.N. pursues a humanitarian ceasefire in Ukraine, U.N. Secretary-General Antonio Guterres told reporters.

A total of 6,266 people were evacuated from Ukrainian cities through humanitarian corridors on Friday, said Kyrylo Tymoshenko, deputy head of the Ukrainian president’s office.

After failing to capture a single major city, Russia has painted its draw-down of forces near Kyiv as a goodwill gesture in peace talks. The negotiations led to a prisoner exchange on Friday, Tymoshenko said, with the release of 86 Ukrainian troops.

Tymoshenko did not say how many Russian soldiers were released.

Ukraine and its allies say Russian forces have been forced to regroup after suffering heavy losses due to determined Ukrainian resistance.

Regional governors in Kyiv and Chernihiv said Russians were pulling out of areas in both those provinces, some heading back across borders to Belarus and Russia.

In Irpin, a commuter suburb northwest of Kyiv that had been one of the main battlegrounds for weeks, now firmly back in Ukrainian hands, volunteers and emergency workers carried the dead on stretchers out of the rubble.

Lilia Ristich was sitting on a metal playground swing with her young son Artur. Most people had fled; they had stayed.

She listed neighbours who had been killed - the man "buried there, on the lawn"; the couple with their 12-year-old child, all burned alive.

"I pray for all this to end and for them never to come back," she said. "When you hold a child in your arms it is an everlasting fear."