Five weeks of war in Ukraine: from invasion to 'meaningful' talks 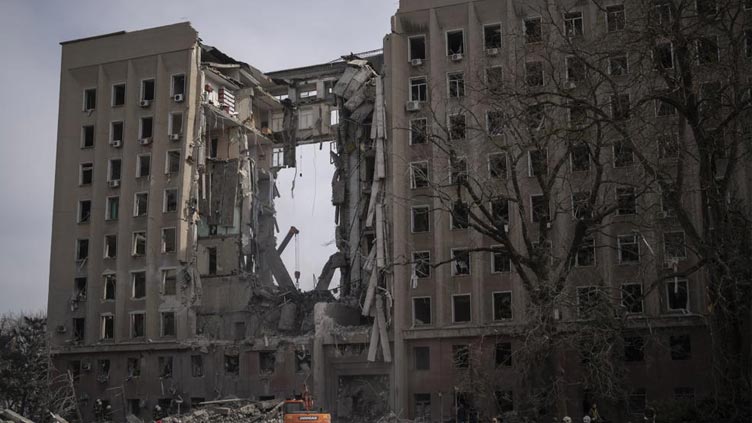 Five weeks of war in Ukraine: from invasion to 'meaningful' talks

PARIS (AFP) - Russia invaded Ukraine in the early hours of February 24, setting off the worst conflict in Europe in decades.

We look back on five weeks of fighting that has killed thousands of civilians, sent four million people fleeing abroad and forced Russia to review its ambitions in the face of fierce Ukrainian resistance.

Russian President Vladimir Putin announces a "special military operation" to "demilitarise" and "de-nazify" the former Soviet state and protect Russian speakers in the country. He warns the international community against intervening.

A full-scale invasion starts with air and missile strikes on several cities. Ukrainian President Volodymyr Zelensky pledges to stay in Kyiv to lead the resistance.

The West weighs in with unprecedented sanctions against Russia and military aid for Ukraine.

A number of Russian banks are banished from the SWIFT interbank system.

Air spaces are closed to Russian aircraft and Russia is kicked out of sporting and cultural events.

With his troops quickly getting bogged down, Putin puts Russia’s nuclear forces on high alert, citing "aggressive" statements by NATO members and the financial sanctions.

During the first peace talks between Kyiv and Moscow, Russia sets out its demands, including the recognition of Russian sovereignty over Crimea, the "demilitarisation" and "de-nazification" of Ukraine and the guarantee of its neutrality.

Russian troops gain ground in the south, where they lay siege to the strategic port of Mariupol, in a bid to link up territory held by pro-Russian rebels with the Russian-annexed peninsula of Crimea.

On March 3, the southern city of Kherson becomes to first city to fall.

Russia enacts a new law punishing "fake news" about what it terms its "special military operation" in Ukraine with jail terms of up to 15 years.

NATO rejects Kyiv’s pleas for a no-fly zone over Ukraine.

On March 8, the first humanitarian corridors are set up, allowing thousands of civilians to escape the northeastern city of Sumy and suburbs of Kyiv. Relief comes later to other regions.

In a bid to starve Moscow of funds for the war, US President Joe Biden announces a ban on US imports of Russian oil and gas.

The war nears the border with NATO member Poland when 35 people are killed and more than 130 injured in air strikes on a military training ground outside Lviv.

Zelensky tells the US Congress to "remember Pearl Harbor" as he lobbies one Western parliament after another for more assistance in repelling Russia’s attacks. A day later he warns Germany that Russia is building a new "wall" in Europe between "freedom and bondage."

Biden brands Putin a "war criminal" following the bombing of a theatre in the besieged city of Mariupol where families were sheltering.

Russia says it has used hypersonic missiles for the first time in Ukraine to destroy a weapons storage site.

NATO says it will help Ukraine protect its forces against the threat of chemical and nuclear attack following warnings from the US that Putin could be planning to use chemical weapons and a warning from the Kremlin that he could use nuclear arms in the event of an "existential threat" to Russia.

In a significant shift, the Russian army announces it will focus on the "liberation" of the breakaway Donbas region in eastern Ukraine, saying this was always its "main goal".

Western intelligence sees the announcement as a tacit admission of Russia’s failure to overthrow the Ukrainian government or capture Kyiv.

During a visit to Warsaw, Biden says Putin is a "butcher" who "cannot remain in power." European allies distance themselves from his remark, which he later walks back, saying he is not seeking regime change.

The death toll in Mariupol climbs to at least 5,000, an official says. Nationwide, at least 20,000 people have been killed, according to Zelensky.

Russia says it will "radically" reduce its military activity around Kyiv and the northern city of Chernigiv after "meaningful" progress in peace talks held in Istanbul.

Ukraine says it is prepared to become neutral, a key Russian demand, in return for an international agreement guaranteeing its security.