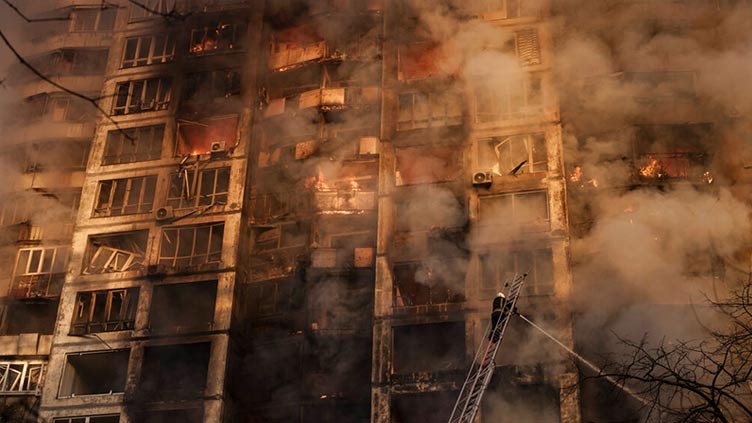 Battles continue to rage in cities like Mariupol, Kharkhiv and Mykolaiv

The blasts came as Russia intensifies attacks on the Ukrainian capital, which was placed under curfew late Tuesday due to what its mayor called a "difficult and dangerous moment".

At least three loud explosions were heard just after dawn in the western part of the city, and thick clouds of smoke billowed into the sky.

Images released by the emergency services showed the top corner of one building had been partially destroyed, while the other had damage and scorch marks to its roof and upper part.

It was not possible to immediately visit the scene as journalists are restricted from moving around the city during the curfew, which lasts until Thursday morning.

At least four people were killed and 40 injured in a Russian strike that set a building on fire in Kyiv’s Sviatoshynsky district on Tuesday. Several other buildings were also hit.

Nearly three weeks after the invasion of Ukraine, Russian forces hemming in Kyiv on two sides have stepped up their attacks, with many in the capital fearing a full-on assault could come soon.

Battles continue to rage in cities like Mariupol, Kharkhiv and Mykolaiv, as well as in suburban towns just outside Kyiv.