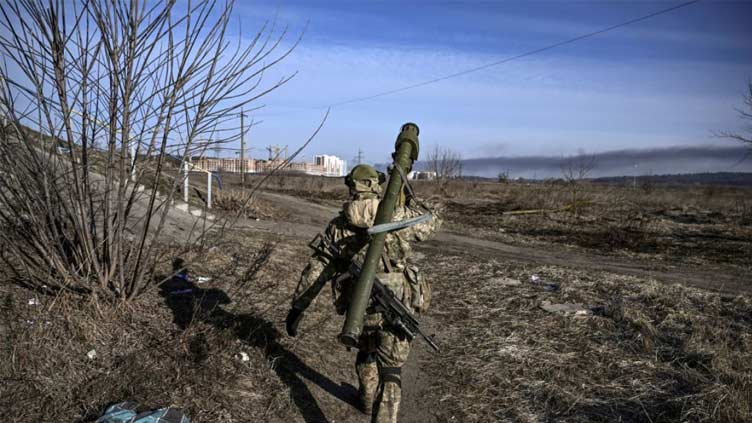 Attempts to evacuate hundreds of thousands of people have repeatedly failed.

KYIV (AFP) - Ukraine prepared Sunday for a "relentless defence" of Kyiv as the capital faced possible encirclement by Russian forces who also launched an air strike on a military base outside the city of Lviv, near the Polish border.

In a video address posted on social media late Saturday night, President Volodymyr Zelensky was adamant that the Russians would not take Ukraine.

Local officials said Russian forces had fired eight missiles at a military training ground about 40 kilometres (25 miles) northeast of Lviv, which is a hub for joint exercises between Ukrainian soldiers and NATO allies.

The head of the Lviv regional administration, Maxim Kozitsky, said there was no information yet on casualties.

A convoy of humanitarian aid headed for the southern port city of Mariupol was blocked at a Russian checkpoint, but hoped to arrive on Sunday, Deputy Prime Minister Iryna Vereshchuk said.

The strategic port is facing what Ukraine says is a "humanitarian catastrophe" after more than 1,500 civilians were killed.

Attempts to evacuate hundreds of thousands of people have repeatedly failed.

"Mariupol is still surrounded. That which they cannot have by war, (the Russians) want to have by hunger and despair. Since they cannot bring down the Ukrainian army, they target the population," a French military source said.

A top Russian officer described the situation in stark language.

"Unfortunately, the humanitarian situation in Ukraine is continuing to deteriorate rapidly, and in some cities, it has reached catastrophic proportions," said the head of the Russian National Defence Control Centre, Mikhail Mizintsev.

In his video address, Zelensky appealed for more aid.

"I keep reiterating to our allies and friends abroad; they have to keep doing more for our country, for Ukrainians and Ukraine. Because it is not only for Ukraine, but it is for all of Europe," he said.

Other cities have already fallen or been surrounded since Russia invaded its neighbour on February 24, with civilians targeted in what the United Nations warned could amount to war crimes.

The key southern port of Odessa was preparing for an offensive by Russian troops, who were concentrating about 100 kilometres (60 miles) to the east in the city of Mykolaiv.

Mykolaiv, which lies on the road to the strategic port city, has been under attack for days, and an AFP reporter said a hospital there came under fire.

Zelensky said "about 1,300" Ukrainian soldiers had been killed since February 24, giving his country’s first official toll.

He claimed Russia had lost about 12,000 troops while Moscow, for its part, has only given a toll of 498 dead, released on March 2.

At least 579 civilians have been killed, according to a tally Saturday by the United Nations, which stressed that its figures were probably much lower than reality.

The UN estimates that almost 2.6 million people have fled Ukraine since the invasion, most of them to Poland, in Europe’s worst refugee crisis since World War II.

In Kyiv, only the roads to the south remain open and the city is preparing to mount a "relentless defence", according to the Ukrainian presidency.

Kyiv Mayor Vitali Klitschko said the capital, described by a senior Ukrainian official Friday as a "city under siege", was reinforcing defences and stockpiling food and medicine.

Britain’s ministry of defence estimated that Russian forces were about 25 kilometres from Kyiv on Saturday and that a column north of the city had dispersed, reinforcing the indication of an attempt to encircle it.

However, the Russians are encountering resistance from the Ukrainian army to both the east and west of the capital, according to AFP journalists on the spot.

Ukrainian soldiers said they believe the Russians have overestimated their resources, in terms of troops and equipment, and underestimated those of their opponents.

"They have to camp in villages in temperatures of nearly minus 10 Celsius at night. They lack provisions and have to raid houses," said one soldier, Ilya Berezenko, 27.

Intense efforts at diplomacy continued, with the leaders of France and Germany, Emmanuel Macron and Olaf Scholz, urging Russian counterpart Vladimir Putin during a three-way phone conversation on Saturday to end the deadly blockade, Paris said.

Facing growing international condemnation, Putin sought to turn the tables, slamming Kyiv for what he described as the "flagrant violation" of international humanitarian law and accusing Ukraine’s army of executing dissenters and using civilians as hostages.

The French presidency denounced his accusations, made during the talks with Macron and Scholz, as "lies".

But in a small glimmer of hope, Zelensky said Saturday that Russia -- after appearing not to budge for days -- had adopted a "fundamentally different approach" in the latest talks to end the conflict.

He told reporters he was "happy to have a signal from Russia" after Putin spoke of "some positive shifts" in a near-daily dialogue.

As Russia widens its bombardment, Zelensky’s pleas for help have grown increasingly desperate.

Washington and its EU allies have sent funds and military aid to Ukraine and taken action against Russia’s economy and oligarchs. A cultural and sporting boycott has further isolated Moscow.

In the Kyiv suburb of Irpin on Saturday, a Ukrainian soldier who gave his name only as Viktor showed off his British anti-tank missile system and the twisted remains of a Russian vehicle it destroyed.

"I want to say a big thank you to our British comrades helping us," he said.

As international sanctions against Moscow have steadily tightened, crippling Russia’s economy, the country’s space agency Roscosmos warned Saturday that the International Space Station could crash if Russian spacecraft serving it are affected.

But Washington on Friday added more layers of sanctions, this time ending normal trade relations and announcing a ban on Russian vodka, seafood and diamonds.

And on Saturday, US President Joe Biden authorised up to $200 million in new weapons and other aid to Ukraine.

But he has ruled out direct action against nuclear-armed Russia, warning that it would lead to "World War III".