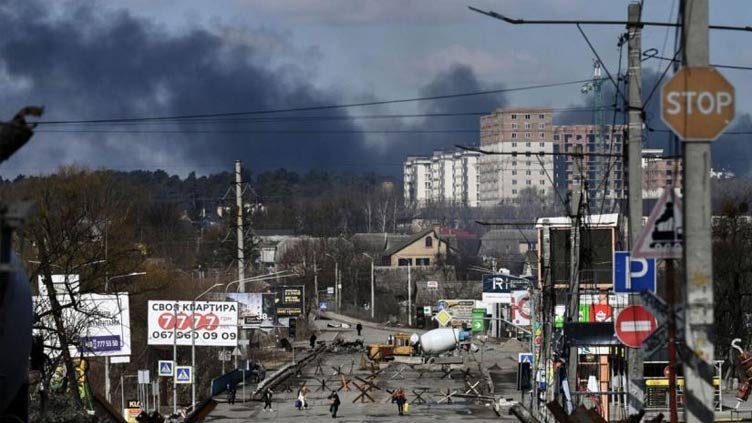 KYIV (AFP) - Russian troops edged closer to Kyiv on Friday, as officials said the Ukrainian capital was being transformed into a "fortress" and President Volodymyr Zelensky accused Moscow of again targeting humanitarian corridors.

Hundreds of thousands of civilians remain holed up in Ukrainian cities, including besieged Mariupol, under a Russian bombing campaign after the first talks between Moscow and Kyiv’s top diplomats ended without any progress.

The Ukrainian military in a statement warned "the enemy is trying to eliminate the defences of the Ukrainian forces around" regions to the west and northwest of the capital "to block Kyiv."

"We can’t rule out a movement of the enemy to the east towards Brovary," the statement added.

In the capital, mayor Vitali Klitschko said half the population had fled, adding that the city "has been transformed into a fortress".

"Every street, every building, every checkpoint has been fortified."

Russian forces are currently encircling at least four major Ukrainian cities and armoured vehicles have rolled up to Kyiv’s northeastern edge, where suburbs including Irpin and Bucha have endured days of heavy bombardment.

Ukrainian soldiers there described fierce fighting for control of the main highway leading into the capital, and AFP reporters saw missile strikes in Velyka Dymerka just outside Kyiv’s city limits.

"It’s frightening, but what can you do?" said Vasyl Popov, a 38-year-old advertising salesman. "There is nowhere to really run or hide. We live here."

Britain’s defence ministry said in an intelligence update that "Russian forces are committing an increased number of their deployed forces to encircle key cities."

"This will reduce the number of forces available to continue their advance and will further slow Russian progress," a statement tweeted by the ministry said.

But there has been no let-up in the onslaught on several major cities, with the besieged southern port city of Mariupol suffering relentless bombardment, including on attempted aid deliveries, according to Zelensky.

He said Moscow had launched a "tank attack" targeting a humanitarian corridor where he had dispatched a convoy to try to get food, water and medicine into the city.

The attack, which Zelensky described in a video statement as "outright terror", came a day after the bombing of a children’s hospital there that local officials said killed three people, including a young girl.

Zelensky branded that attack a Russian "war crime", a position backed by top Western officials, while Russia’s army claimed the bombing was a "staged provocation" by Ukraine.

In a video, Mariupol mayor Vadym Boichenko said Russian warplanes had targeted residential areas in the city "every 30 minutes" on Thursday, "killing civilians, the elderly, women and children."

The situation in city has been described as "apocalyptic", with more than 1,200 civilians killed in 10 days of constant attacks, according to the mayor.

The International Committee of the Red Cross said some residents had started fighting for food, and many had run out of drinking water.

"Some people still have food but I’m not sure for how long it will last. Many people report having no food for children," said Mariupol-based ICRC representative Sasha Volkov in an audio recording.

Some humanitarian corridors out of cities under attack have held.

Around 100,000 people have been able to leave the northeastern city of Sumy, the eastern city of Izyum, and areas northwest of Kyiv in the last two days, Ukrainian officials said.

Moscow said it would also open daily humanitarian corridors to evacuate civilians to Russian territory, but Kyiv has rejected routes leading to Russia.

The UN’s refugee agency estimates more than 2.3 million refugees have left Ukraine since Russia shocked the world by invading its neighbour on February 24, and some 1.9 million Ukrainians have been internally displaced.

Overall, at least 71 children have been killed and more than 100 wounded in Ukraine since the war began, said Lyudmyla Denisova, the Ukraine parliament’s point person on human rights.

And the UN says two other Ukrainian maternity hospitals have been attacked and destroyed, including one in Zhytomyr, west of Kyiv, in addition to the Mariupol attack.

‘No progress’ in Turkey talks

In Turkey, Ukraine’s Foreign Minister Dmytro Kuleba said his talks with his Russian counterpart Sergei Lavrov ended with "no progress," even on a 24-hour ceasefire.

He said Russian President Vladimir Putin launched the operation as the situation in Ukraine "posed a direct threat to the Russian Federation".

Russia has also ramped up its claims about alleged biological weapons development in Ukraine, which Western officials have said could be an attempt to lay the ground for their possible use by Moscow’s forces in the country.

On Friday, the UN Security Council will hold an urgent meeting on the subject at Moscow’s request.

The conflict has so far caused around $100 billion in damage to roads, bridges and businesses, according to Oleg Ustenko, Zelensky’s chief economic advisor.

Western nations and allies have offered military and humanitarian support, and on Friday the US congress passed a budget including $14 billion for Ukraine.

But the US has ruled out enforcing a no-fly zone, and rejected a Polish plan to transfer fighter jets to Ukraine via a US air base for fear of being drawn directly into the conflict.

The State Department said Thursday that Washington would "continue to provide our Ukrainian partners with the surface-to-air systems that they need" though Moscow has warned supplying deadly weapons was "creating a colossal danger."

With global anger surging online as the war rages, Facebook said late Thursday it has temporarily eased its rules on violent speech to allow statements like "death to Russian invaders", while still barring threats against Russian civilians.

Western sanctions have targeted Russia’s financial system and its oligarchs, including Chelsea football club owner Roman Abramovich, who was hit Thursday by a UK assets freeze and travel ban.