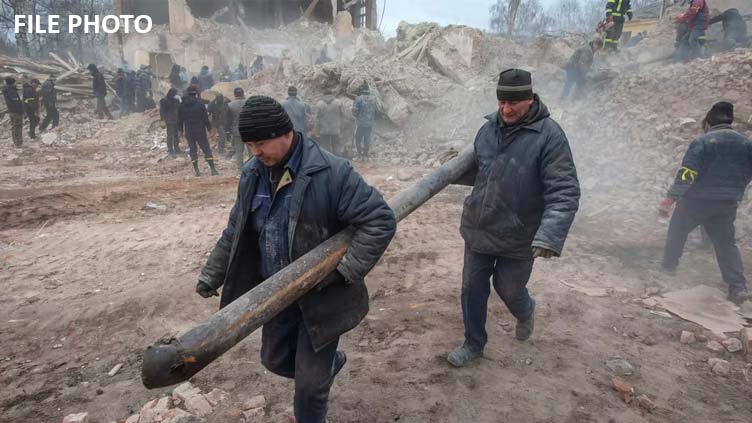 The corridor from Sumy to Poltava is designed to evacuate civilians.

KYIV (AFP) - An air strike killed at least nine people, including two children, in the Ukrainian city of Sumy, where a humanitarian corridor was to be set up Tuesday, authorities said.

The corridor from Sumy to Poltava is designed to evacuate civilians, including Chinese, Indians and other foreigners, but Ukraine’s vice prime minister accused Russia of planning to disrupt the route.

"Enemy planes insidiously attacked apartment buildings," they said on Telegram after arriving on the scene at 11:00 pm.

Sumy, 350 kilometres (218 miles) east of Kyiv, has experienced heavy fighting for days, but no other details about the attack were immediately available.

Iryna Vereshchuk, Ukraine’s vice prime minister, said the Russian defence ministry had agreed to start the corridor early Tuesday in a letter to the International Committee of the Red Cross.

"We have information that the Russian side has planned to disrupt the corridors," she added.

"Manipulations are being prepared to force people to take another route, which is not coordinated and dangerous," the vice prime minister said.

She said the corridor was also designed to channel the delivery of food and medicine.

The vice prime minister said the first convoy was supposed to begin at 10:00 am, one hour after the start of what Ukraine hopes is a ceasefire that is due to last until 9:00 pm.

She called on Russia to "urgently coordinate" humanitarian corridors from the cities of Volnovakha, Maripuol, Mariupol, as well as from Kyiv, Kharkiv and their surrounding regions.