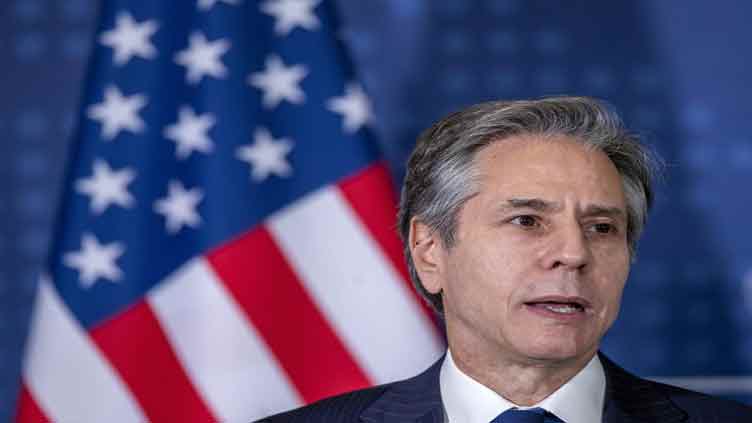 VILNIUS (AP) — U.S. Secretary of State Antony Blinken on Monday assured Lithuania of NATO protection and American support as he began a lightning visit to the three Baltic states that are increasingly on edge as Russia presses ahead with its invasion of Ukraine.

The former Soviet republics of Latvia, Lithuania and Estonia are all NATO members and Blinken is aiming to reassure them of their security in the event Russia chooses to expand its military operations.

“We are bolstering our shared defense so that we and our allies are prepared,” Blinken said, stressing that the U.S. commitment to NATO’s mutual defense pact is “sacrosanct,”

Memories of Soviet rule are still fresh in the Baltics and since the invasion of Ukraine last month, NATO has moved quickly to boost its troop presence in its eastern flank allies while the U.S. has pledged additional support.

Blinken’s opened his Baltic tour in Vilnius, where Lithuanian support for Ukraine’s resistance to the Russian invasion is palpable as signs of solidarity with Ukrainians are evident in many businesses and on public buildings and buses.

“Unfortunately, the worsening security situation in the Baltic region is of great concern for all of us and around the world,” Lithuanian President Gitanas Nauseda told Blinken. “Russia’s reckless aggression against Ukraine once again proves that it is a long-term threat to European security, the security of our alliance.”

Nauseda said that a policy of deterrence was no longer enough and that “forward defense” was now needed. He predicted that “Putin will not stop in Ukraine if he will not be stopped.”

“It is our collective duty as a nation to help all Ukrainians with all means available,” said Nauseda. “By saying all, I mean, indeed all means all, if we want to avoid the Third World War. The choice is in our hands.”

Lithuanian Foreign Minister Gabrielius Landsbergis called for a surge in assistance to Ukraine, noting that the NATO allies “are doing a lot, but we cannot stop.” He also called for an immediate halt to imports of Russian energy. “We cannot pay for oil and gas with Ukrainian blood,” he said.

Lithuania is also dealing with pressure from another large power — China — for its relationship with Taiwan, the island China regards as a renegade province. China has taken actions, including halting imports of certain products, against Lithuania for allowing Taiwan to open a de facto embassy in Vilnius.

Blinken said the Ukraine situation was relevant to Lithuania’s Taiwan situation as all countries should have the right to pursue their own foreign policies. “Every nation is free to associate with whom it chooses,” he said. The United States continues to stand by Lithuania and every nation to choose its own path.”

Blinken arrived in the Baltics late Sunday from non-aligned Moldova, which is also warily watching the war on its doorstep, and Poland, where he visited the Polish-Ukrainian border and met with refugees from Ukraine.

Later Monday, Blinken will travel to Riga, where he will meet senior Latvian officials and Israeli Foreign Minister Yair Lapid, before visiting Tallinn, Estonia and then going on to Paris for talks with French President Emmanuel Macron on Tuesday.

Israeli Prime Minister Naftali Bennett met with Russian President Vladimir Putin over the weekend and Macron has been in frequent contact with the Russian leader.