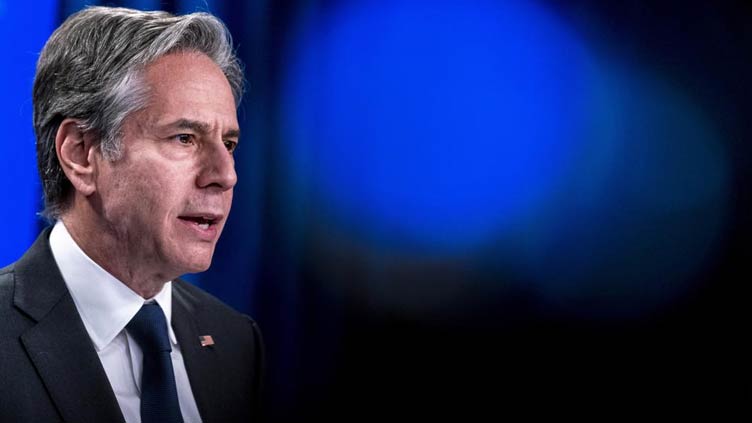 WASHINGTON (AP) — Secretary of State Antony Blinken will meet with his Russian counterpart in Switzerland this week as tensions between the U.S. and Russia escalate over a possible Russian invasion of Ukraine, the State Department said Tuesday.

The State Department said Blinken will travel to Kyiv on Wednesday to meet with President Volodymyr Zelenskyy, move on to Berlin and then meet Russian Foreign Minister Sergey Lavrov in Geneva on Friday. The hastily arranged trip aims to show U.S. support for Ukraine and impress on Russia the need for de-escalation.

The meetings follow inconclusive diplomatic talks between Moscow and the West in Europe last week that failed to resolve stark disagreements over Ukraine and other security matters.

Instead, those meetings appear to have increased fears of a Russian invasion, and the Biden administration has accused Russia of preparing a “false flag operation” to use as a pretext for intervention. Russia has angrily denied the charge.

From Kyiv, Blinken will travel to Berlin, where he will meet with his German, British and French counterparts to discuss a possible response to any Russian military action. In Geneva on Friday, Blinken will be testing Lavrov on Russia’s interest in a “diplomatic off-ramp” for the crisis, a senior State Department official said. The official was not authorized to discuss the matter publicly and spoke to reporters on condition of anonymity.

Russia has massed some 100,000 troops with tanks and other heavy weapons on its own soil near the Ukrainian border in what many observers believe may be preparation for an invasion.

Blinken’s “travel and consultations are part of the diplomatic efforts to de-escalate the tension caused by Russia’s military build-up and continued aggression against Ukraine,” the State Department said in a statement.

Blinken will meet with Zelenskyy and Ukrainian Foreign Minister Dmytro Kuleba on Wednesday “to reinforce the United States’ commitment to Ukraine’s sovereignty and territorial integrity,” the State Department said.

“The trip follows extensive diplomacy with our European Allies and partners about a united approach to address the threat Russia poses to Ukraine and our joint efforts to encourage it to choose diplomacy and de-escalation in the interests of security and stability,” it said.

On Monday, Lavrov, Russia’s top diplomat, rejected the U.S. allegations that his country was preparing a pretext to invade Ukraine. Speaking to reporters, he dismissed the U.S. claim as “total disinformation.”

Lavrov reaffirmed that Russia expects a written response this week from the U.S. and its allies to Moscow’s request for binding guarantees that NATO will not embrace Ukraine or any other ex-Soviet countries or station its forces and weapons there.

Blinken underscored to Lavrov on Tuesday that any discussion of European security “must include NATO Allies and European partners, including Ukraine,” the State Department said.

The Russian Foreign Ministry said Lavrov emphasized in the call with Blinken the key aspects of Russian draft documents envisaging “legally binding guarantees of Russia’s security in line with the principle of indivisibility of security approved by all countries in the Euro-Atlantic.” It said Lavrov stressed the importance for Washington to quickly deliver a written response to the Russian proposals.

Washington and its allies firmly rejected Moscow’s demands during last week’s Russia-U.S. negotiations in Geneva and a related NATO-Russia meeting in Brussels.

The White House said Friday that U.S. intelligence officials had concluded that Russia had already deployed operatives to rebel-controlled eastern Ukraine to carry out acts of sabotage there and blame them on Ukraine to create a pretext for possible invasion.

Ahead of Blinken’s visit to Kyiv, a delegation of U.S. senators was visiting Ukraine to emphasize congressional support for the country.

“Our bipartisan congressional delegation sends a clear message to the global community: the United States stands in unwavering support of our Ukrainian partners to defend their sovereignty and in the face of persistent Russian aggression,” Sen. Jeanne Shaheen, a New Hampshire Democrat, said in a statement.

Speaking Monday on a visit to Kyiv, German Foreign Minister Annalena Baerbock warned that “any further escalation would carry a high price for the Russian regime — economic, political and strategic,” and she emphasized the need to continue negotiations.

“We are prepared to have a serious dialogue with Russia, because diplomacy is the only way to defuse this highly dangerous situation at the moment,” she said.

Russia in 2014 seized the Crimean Peninsula after the ouster of Ukraine’s Moscow-friendly leader and also threw its weight behind a separatist insurgency in eastern Ukraine. More than 14,000 people have been killed in nearly eight years of fighting between the Russia-backed rebels and Ukrainian forces in the country’s industrial heartland called Donbas.

Russian President Vladimir Putin has warned that Moscow will take unspecified “military-technical measures” if the West stonewalls its demands.