Battle for 'future of Yemen' as rebels close on key city 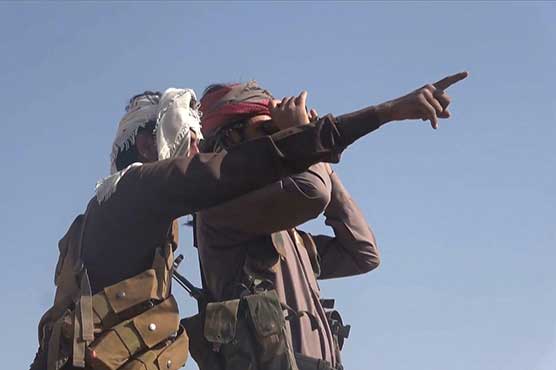 Battle for 'future of Yemen' as rebels close on key city

Seizing Marib would be a game-changer, completing the rebels' takeover of Yemen's north

DUBAI (AFP) - Yemen s Huthi rebels could be on the verge of changing the course of the war as they close in on a key northern city, experts say, warning millions of refugees are at risk.

Hundreds of fighters have died in fierce clashes this month after the Iran-backed insurgents renewed their campaign for Marib, the government s last bastion in the oil-rich northern region.

Seizing Marib would be a game-changer, completing the rebels  takeover of Yemen s north while giving them control of oil resources and the upper hand in any peace negotiations.

It also raises fears for the more than two million refugees living in camps in the region after fleeing other frontline cities during the long-running conflict.

"The battle of Marib will determine the future of Yemen," Abdulghani Al-Iryani, a senior researcher at the Sanaa Center for Strategic Studies, told AFP. "Huthis control most of the governorate and are closing in on the city."

The severe threat to Marib comes just over seven years after the rebels overran the national capital Sanaa, just 120 kilometres (75 miles) to the east, in 2014.

The takeover prompted the Saudi-led intervention to prop up the government the following year. The grinding war has created what the United Nations calls the world s worst humanitarian crisis with millions of displaced people on the brink of famine. "The refugees will probably pay the highest price for this destructive war," said Iryani.

Marib sits at a crossroads between the southern and northern regions and is key to controlling Yemen s north. If it falls, the Huthis could be emboldened to push into the government-held south, analysts say.

Ahmed Nagi, of the Malcolm H. Kerr Carnegie Middle East Center, said they have made significant advances after opening new fronts around Marib in recent weeks.

If they seize the city, "the Huthis will use Marib to advance towards the southern governorates bordering it", he told AFP.

The Huthis began a big push to seize Marib in February and, after a lull, they renewed their campaign this month, prompting intense air bombardments from coalition forces.

"Losing Marib to the Huthis could change the course of the war," said Elisabeth Kendall, researcher at the University of Oxford s Pembroke College.

"It would be another nail in the coffin of the government s claim to authority and would strengthen Huthi leverage in any projected peace talks."

According to Iryani, there still lies the possibility that Marib s tribes and parties, which fight on the government side, accept a Huthi deal to spare the city destruction.

"It s unlikely that they will fight their way into the city. More likely, they will strike a deal. Neither side wishes to engage in a bloody urban battle," he said.

"The offer stipulates the local government disavow the coalition, declare neutrality and share the governorate s resources with (the rebels in) Sanaa. "In return, Huthis will leave the city alone and recognise its local government."

The city had between 20,000 and 30,000 inhabitants before the war, but its population has ballooned as Yemenis fled there from other parts of the country.

With about 139 refugee camps in the province, according to the government, hosting approximately 2.2 million people, the displaced civilians are caught in the line of fire once again.

"As they disperse, it will be harder for them to access humanitarian assistance and, with the spectre of famine looming over Yemen, the Marib battle will make it more imminent," said Iryani.

Kendall said "if the rebels seize Marib, the impact on the humanitarian situation will be dire", while Nagi predicted a "huge" disaster.

About 80 percent of the 30 million people in Yemen, long the Arabian Peninsula s poorest country, are dependent on aid.

While the UN and the US are pushing for an end to the war, the Huthis have demanded the reopening of Sanaa airport, closed under a Saudi blockade since 2016, before any ceasefire or negotiations.

"Taking over Marib will not push the Huthis to accept the brokered peace or even to be committed to it if it is accepted," said Nagi. "On the contrary, it encourages Huthis to move to the other southern parts to ensure its full control over all Yemen."