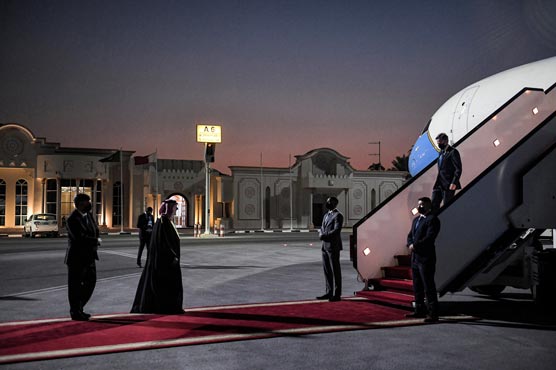 DOHA (Reuters) - U.S. Secretary of State Antony Blinken arrived on Monday in Qatar where he will seek support to evacuate Americans and at-risk Afghans left behind in Afghanistan.

"This is the first overland evacuation facilitated by the State Department," the official said, adding that the Taliban were aware of the operation and did not impede safe passage of the individuals.

The official did not name the country they transited to.

Dubbed as a "thank you" tour to Qatar and Germany, who were instrumental in helping Washington evacuate thousands of people out of Kabul, Blinken will meet with senior Qatari and German officials. In Germany he will also co-host a ministerial meeting on Afghanistan.

Qatar has emerged as the main mediator between the Taliban, who swept into Kabul on Aug. 15, and Western countries following the chaotic U.S. withdrawal from Afghanistan.

Doha said on Saturday it has reopened Kabul airport for humanitarian aid and domestic flights in coordination with the hardline Islamist group. Other international flights are expected to resume soon, it added.

Daily flights have been scheduled from Doha to Kabul to deliver aid.

U.S. Defence Secretary Lloyd Austin, who is travelling to the Gulf on a separate trip, will also visit Qatar on Tuesday. Austin s visit also includes Saudi Arabia and Kuwait.