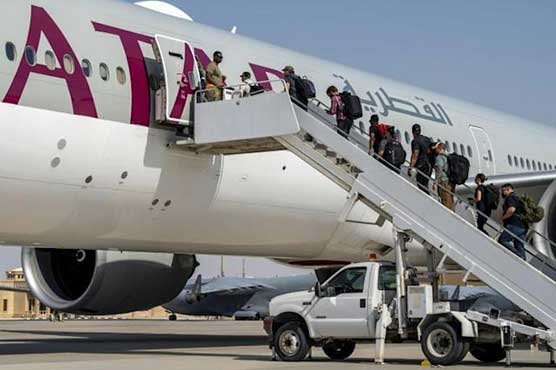 DUBAI (AFP) - The Taliban s lightning takeover of Afghanistan forced Hariss to bring forward his escape plan, only to find himself stranded on a Qatari airbase packed with evacuees yearning for new lives in the US.

US officials confirmed evacuation operations from Afghanistan stalled for several hours on Friday because the receiving base in Qatar was overcrowded and could receive no further evacuees.

"There are thousands of Afghans in horrific conditions," Hariss told AFP via WhatsApp.

"This is our third day here and there is no WiFi, only one washroom and one toilet," said the 31-year-old, who landed at the base on Wednesday and asked to be identified only by his first name for fear of retribution.

"Still here at the base, apparently waiting to be boarded onto a plane but not sure how many more hours. We don t get any accurate info right away. Finding info is impossible."

Qatari officials have stressed that "all evacuated people are provided proper accommodation and all other required resources".

But Hariss complained that he and other evacuees "have been awake for days" with him and his countrymen offered scant information about their next destination.

At a villa complex 10 minutes from the heart of Doha, another group of refugees recently arrived from Afghanistan began to settle in following their exodus.

"I saw a Taliban member hitting someone trying to climb the airport fence, and I felt so scared, I couldn t look him in the eye... I was terrified," said one woman who had travelled with her brother and now hopes to settle in the US.

"We have family and friends and we want to help them, but the problem is getting to the airport... At the beginning they let everyone enter without documents, but now it is very difficult," she said.

"My family is still there and I am afraid for them, and my father is now hiding somewhere in Afghanistan."

The US State Department has faced criticism for fielding insufficient staff to process the number of Afghans seeking to travel to the United States as well as erecting bureaucratic hurdles.

Major General Hank Taylor said on Friday that US aircraft flew out of Kabul with some 6,000 people until the bottleneck halted flights.

Operations from Kabul resumed late Friday after US forces in Qatar arranged for onward flights for many evacuees to the US military base in Ramstein, Germany.

Unlike most of his fellow countrymen Hariss, the Afghan at the airbase, has a US residency permit and his family lives in Virginia.

He had planned to leave Kabul on a commercial flight when Taliban forces reached the outskirts of the capital.

But the sudden fall of the city forced him to abandon his initial plan and board a US military flight.

At the vast Al-Udeid base in Qatar, which houses the biggest US airbase in the region, Hariss said many children, men and women were sleeping on the floor.

"I have given hundreds of people my (data) hotspot -- and I don t know how much will I be charged later," he told AFP.

Six days after the Taliban took back power in Afghanistan, the flow of people trying to flee the Islamist hardliners continued to overwhelm the international community s efforts.

US President Joe Biden warned he could not predict the outcome of one of the "most difficult airlifts in history".

Washington says that the evacuation is now being assisted by an array of countries including Bahrain, Britain, Denmark, France, Germany, Italy, Kazakhstan, Kuwait, Qatar, Tajikistan, Turkey, Ukraine, the UAE and Uzbekistan.

Qatar said that more than 7,000 people have been evacuated from Afghanistan to the Gulf emirate so far, while the UAE said Friday it had helped 8,500 to safety.

Hariss described "chaotic" scenes at the US base in Qatar.

"Everyone is pushing and creating havoc worse than (at) the airport gates," he said, adding that he tried to calm the Afghans and guide them, but a US soldier questioned his authority and called him "delusional".

"I think they are delusional for losing the war from a bunch of motorcyclists with sandals," he told AFP.