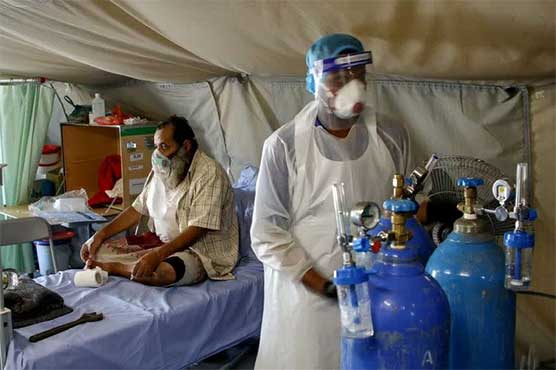 The 360,000 doses of AstraZeneca's vaccine arrived by plane at Aden

ADEN (Reuters) - Yemen received its first COVID-19 vaccines on Wednesday, a week after the internationally recognised government declared a health emergency in areas under its control.

The 360,000 doses of AstraZeneca s vaccine arrived by plane at Aden, part of a consignment from the global COVAX vaccine-sharing scheme expected to total 1.9 million doses this year, COVAX said.

In Aden, the government s interim capital in a six-year-old war, patients at an isolation centre in the grounds of a hospital lay on temporary beds in tents next to oxygen cylinders, breathing heavily.

"We need more staff, because the rise in cases is not normal. We are exhausted from work, exhausted," said Zainab al-Qaisi, a doctor and director of the centre. "The centre is overwhelmed. We need oxygen, to expand intensive care across all provinces."

The COVAX vaccines will be free, and distributed across the country, a spokesman for the government s health ministry said last week, confirming more shots would arrive in May.

Aid group Médecins Sans Frontières (MSF) said last week it had seen a dramatic influx of critically ill COVID-19 patients in various parts of Yemen, and that all aspects of the COVID-19 response were lacking.

"While some countries have successfully vaccinated half of their population, Yemen finds itself at the back of the queue," said MSF s Head of Mission in Yemen, Raphael Veicht.

Yemen s health system has been battered by war, economic collapse and, recently, a shortfall in humanitarian aid funding.

The war has restricted COVID-19 testing and reporting. The Houthi movement that is battling a pro-government coalition, and controls most large urban centres, has provided no figures since last May, but numbers of confirmed cases have risen rapidly since mid-February.

Yemen s emergency coronavirus committee reported 132 confirmed and 19 deaths on Tuesday. It has recorded more than 4,100 coronavirus infections and 864 deaths so far though the true figure is widely thought much higher.

COVAX is co-led by the GAVI alliance, which secures vaccines for poor countries, the World Health Organization, the Coalition for Epidemic Preparedness Innovations and U.N. Children s Fund UNICEF.

"Yemen now has the capacity to protect those most at risk, including health workers, so that they can safely continue to provide life-saving interventions for children and families," said Philippe Duamelle, UNICEF s representative in Yemen.