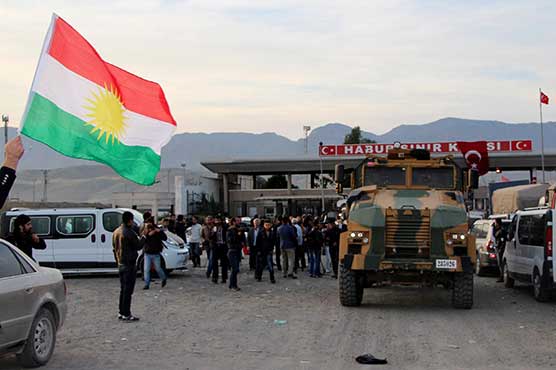 ANKARA/BAGHDAD (Reuters) - Turkey is taking its decades-old conflict with Kurdish militants deep into northern Iraq, establishing military bases and deploying armed military drones against the fighters in their mountain strongholds.

The cross-border campaign has attracted less attention than Turkey s incursions into neighbouring Syria - partly because Turkish troops have long been in Iraq - but it is part of a strategy to push the fight beyond its borders after years of bloodshed at home.

Turkey has been battling an insurgency in its mainly Kurdish southeast by Kurdistan Workers Party (PKK) militants that has killed 40,000 people since the 1980s and which has largely been directed from within Iraq.

After the breakdown of peace efforts in 2015, heavy fighting erupted again in Turkey. Since then President Tayyip Erdogan s government has sought to address what it says is the root of the crisis.

"The new approach aims to destroy the threat from where it begins," a Turkish official told Reuters.

A ground assault launched on June 17 and dubbed Operation Claw Tiger has seen Turkish troops advance up to 40 km (25 miles) inside Iraq and establish over 30 "temporary bases", the official said, speaking on condition of anonymity.

It aims to deny PKK fighters any sanctuary near the border, cut their supply lines between Iraq and Syria, and prepare the ground for a possible offensive on the main PKK stronghold around the Qandil mountains, inside Iraq on the Iranian border.

Turkey s frequent claims of military gains in a conflict far from the spotlight are difficult to verify, but analysts and an Iraqi Kurdish official say the scope of the air and ground offensives extends beyond Ankara s usual operations.

Baghdad summoned Turkey s ambassador last month to formally complain, but the central government has limited authority in the autonomous region, while the Kurdistan Regional Government in northern Iraq is wary of antagonising Turkey, which has NATO s second largest standing army.

"Baghdad has been very quiet and we are forced to be very quiet, otherwise we run the risk of escalation with Turkey," an official in the KRG said.

The Iraq operation comes after Turkey launched three incursions into northern Syria in three years to drive PKK and Islamic State fighters from its borders, and then deployed forces in Idlib province to halt a Russian-backed Syrian government offensive against Syrian rebels.

Turkey has also projected power in the east Mediterranean, turning the tide of Libya s conflict by helping to repulse an attack on Tripoli, and has established military bases in the Gulf and the Horn of Africa.

Turkey s interventions under Erdogan have alarmed regional rivals Egypt and the United Arab Emirates and led to accusations from domestic opponents that he is seeking diversions from an economic crisis and political setbacks after 17 years in power.

Much of the new military muscle comes from domestically produced armed drones. In Iraq, that means Turkey can attack militants in areas once beyond its reach.

PKK casualties in Iraq had risen in the last year, with increasing numbers of veteran fighters killed in targeted strikes, the International Crisis Group (ICG) says.

"The use of drone technology appears to have significantly shifted the balance of power on the ground, allowing Turkish forces to go after militants in areas previously difficult to penetrate," ICG Turkey analyst Berkay Mandiraci said.

The ICG says 5,000 people have been killed in Turkey s wider conflict with the PKK since the 2015 ceasefire collapse, one tenth of them in northern Iraq. So far this year, that proportion of fatalities in Iraq has leapt to 70%.

Turkish officials say the latest fighting targets several border districts including Haftanin and Metina near Syria to the west, and regions nearer Iran including Avasin and Hakurk, a possible staging post to Qandil further south.

"The operation in Iraq aims to secure Turkey s border, prevent the passage (of PKK fighters) to Syria, and from there infiltration to Turkey," a second Turkish official said. "When the time comes, (targeting) Qandil will be evaluated."

Turkey ultimately may be guided more by progress on the ground than any response from Baghdad.

The Iraqi government is hamstrung by political infighting, an economic crisis and the prospect of more mass unrest, and its own relations with the Kurds have often been fraught - especially when its forces halted a Kurdish bid for independence in 2017.

"From the Baghdad point of view ... the (Turkish) incursion is headed for the KRG, so there s little harm in this," said Bilal Wahab of the Washington Institute for Near East Policy.

"Ultimately these things require some level of respect for Iraq s sovereignty and some sort of power," Wahab said. "On both counts, Iraq has become so weak that it s hard to demand that kind of respect from anyone."