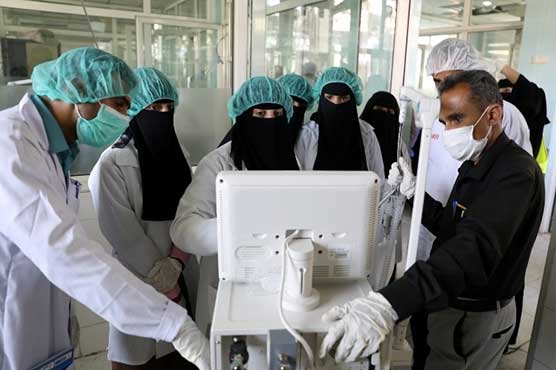 DUBAI (AFP) - Yemen reported its first case of coronavirus Friday in a southern government-controlled province, raising fears of an outbreak in the war-torn country as air strikes blamed on the Saudi-led coalition tested a unilateral truce.

The announcement came on the second day of the two-week ceasefire declared by the military coalition supporting the government in what it said was a move to help fight the pandemic.

"The first confirmed case of coronavirus has been reported in Hadramawt province," Yemen s supreme national emergency committee for COVID-19 said on Twitter.

The committee, run by the internationally recognised government of President Abedrabbo Mansour Hadi, said the infected patient was in stable condition and receiving care.

"The case is in isolation and treatment, all known contacts are being traced and quarantined," the World Health Organization said on Twitter.

"WHO is working closely with (the health ministry) to ensure further rapid containment measures are taken."

Aid groups have warned that when the coronavirus hits Yemen s broken healthcare system, the impact is likely to be catastrophic for a country already in the grip of what the UN calls the world s worst humanitarian crisis.

"More people who become infected are likely to become severely ill than anywhere else."

Yemen is "critically under-equipped" to face the pandemic, said Xavier Joubert, country director for Save the Children in Yemen.

"Only half of Yemen s health facilities are still fully functional," said Joubert.

"There are 700 intensive care unit beds, including 60 for children, and 500 ventilators for a population of about 30 million."

Tens of thousands of civilians have been killed over the past five years in the war between the coalition and the Iran-backed Huthi rebels, who control large parts of Yemen including the capital Sanaa.

Millions have also been displaced and diseases including cholera are widespread due to the scarcity of clean water.

Grande renewed the UN s plea to Yemen s warring parties to "stop fighting each other and start fighting (the virus) together".

But Yemeni pro-government forces and Huthi rebels reported several air raids in the northern districts of Al-Jawf and Hajjah despite the coalition s unilateral ceasefire which began on Thursday.

The coalition raids "targeted Huthi vehicles after they rejected the ceasefire and were attempting to attack government positions", a pro-government source told AFP.

The source also reported ongoing clashes between pro-government loyalists and the rebels in Al-Jawf and the Marib, northern regions which have seen intense fighting since the beginning of the year.

The military alliance said its ceasefire was aimed at helping efforts to prevent a COVID-19 outbreak in Yemen.

The move was welcomed by the United States but dismissed by the Huthi rebels, who charged that the continued coalition air strikes showed the announcement was a public relations stunt.

The United Arab Emirates, a key Saudi ally, said that the battle against the coronavirus trumped all other concerns.

"The COVID-19 crisis eclipses everything -- the international community must step up efforts & work together to protect the Yemeni people," UAE Minister of State for Foreign Affairs Anwar Gargash tweeted.

UN Secretary General Antonio Guterres has repeatedly appealed for ceasefires in conflicts around the world to facilitate the battle against the coronavirus.

The UN envoy to Yemen Martin Griffiths said last week he was engaged in talks to secure a nationwide ceasefire.

Griffiths said he was in regular contact with both sides "on reaching agreements on a nationwide ceasefire, humanitarian and economic measures to alleviate the suffering of the Yemeni people".

"This process further aims to foster joint efforts to counter the threat of COVID-19," he said.

Saudi Arabia is also scrambling to limit the spread of the disease at home. Its health ministry has reported more than 3,200 coronavirus infections and 44 deaths from the illness.

Despite two decades of air and drone strikes by the United States, Yemen also still hosts a significant jihadist presence, with a longstanding Al-Qaeda network challenged in recent years by militants loyal to the Islamic State group.

Control of Hadramawt province, where the first coronavirus case was reported, has long been divided. Coalition-backed government forces control the coastal towns but parts of the interior remain in the hands of Al-Qaeda.