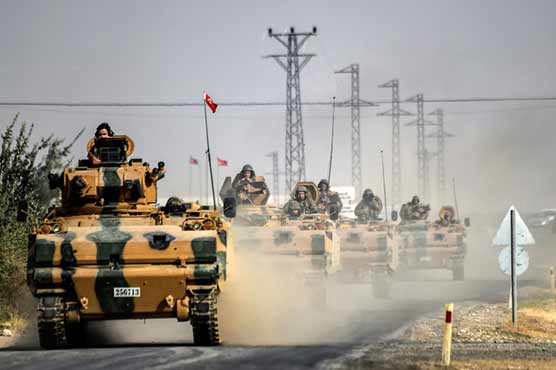 ISTANBUL (AFP) - The leaders of Russia and Turkey held crisis talks Friday after 33 Turkish soldiers died in a regime air strike in Syria, prompting President Donald Trump to urge an end to the Moscow-backed Syrian offensive against rebel holdouts.

The attack by Syrian forces took place late Thursday in the northwestern province of Idlib, where President Bashar al-Assad is waging a fierce campaign to oust rebels from their last stronghold.

Trump "condemned" the attack on Turkey s troops and joined his Turkish counterpart Recep Tayyip Erdogan in calling jointly on Russia and Syria to "halt" the Idlib operation, the White House said.

Hours after the strike, Turkey warned it was opening the gates for refugees to flee to Europe, a move that could have major repercussions for its western neighbours which swiftly moved to boost border security.

The bombardment added to weeks of tensions between rebel supporter and NATO member Ankara and Damascus ally Moscow, and heightened international concerns about the plight of people living in the battleground province.

The United Nations called for an immediate ceasefire and NATO held emergency talks, while the EU warned of the risk of a "major open international military confrontation".

But both Russian President Vladimir Putin and Erdogan appeared keen to scale down the tensions, expressing "serious concern" about the situation in their telephone talks, the Kremlin said.

It was the highest single death toll since the Turkish army first intervened in Syria in 2016, and brought the total number of Turkish troops killed in Idlib this month to 53.

Turkey said it retaliated by hitting more than 200 regime targets in drone and artillery bombardments.

The reprisals killed 20 Syrian soldiers, according to a monitoring group, but there was no immediate confirmation from Damascus.

Adding to the tensions, Moscow said two of its warships were transitting through the Bosphorus Strait in Istanbul in plain sight of the city.

But the Kremlin said after the leaders  call that a Turkey-Russia summit may be on the cards.

"The conversation was detailed and devoted to the necessity to do everything" to implement a largely ineffective ceasefire deal agreed in 2018 between the two countries for Idlib.

Lavrov said Russia was ready to help improve the security of Turkish troops in Syria after the defence ministry said the slain soldiers had been among "terrorist groups" and had not disclosed their presence.

The UN has repeatedly warned that the fighting in Idlib could potentially create the most serious humanitarian crisis since the start of the Syrian conflict in 2011.

Turkey again called on the international community to establish a no-fly zone over Idlib, where regime forces have since December clawed back chunks of the region, forcing close to one million people to flee their homes and shelters amid bitter cold.

Erdogan s communications director Fahrettin Altun accused Assad on Twitter of "conducting ethnic cleansing" to drive millions out of Idlib but said Turkey does not have the resources to take in more.

Turkey has already taken in around four million Syrian refugees and is wary of more arrivals in the face of growing popular discontent about their presence.

But Turkey s neighbours took swift action after Ankara threatened to go back on a deal with the EU and open the way for refugees to go to Europe.

"We will no longer keep the doors closed for refugees who want to go to Europe," a Turkish official told AFP.

In response, both Bulgaria and Greece said they were tightening border security as groups of migrants moved westwards across Turkey.

Greek border guards blocked hundreds of migrants from entering the country at the Kastanies border crossing in the northeast of the country as army trucks loaded with barbed wire raced past.

The EU called on Ankara to uphold its side of the 2016 migrant pact which was aimed at stemming the flow of refugees and migrants landing on Greek shores.

It also voiced deep alarm about the situation in Syria after Thursday s bloodshed.

"There is a risk of sliding into a major open international military confrontation," said EU foreign policy chief Josep Borrell.

"It is also causing unbearable humanitarian suffering and putting civilians in danger."

"Without urgent action, the risk of even greater escalation grows by the hour," UN spokesman Stephane Dujarric said.

NATO allies Washington and Paris said they stood by Turkey, with the US State Department calling for "an immediate end to this despicable offensive by the Assad regime, Russia and Iranian-backed forces".

In a phone call Friday, Trump and Erdogan agreed that the Syrian regime, Russia, and the Iranian regime "must halt their offensive before more innocent civilians are killed and displaced," the White House said.

On Thursday, jihadists and Turkish-backed rebels had re-entered Saraqeb, a key Idlib crossroads town they had lost earlier in February, reversing one of the main gains of the government s devastating offensive.

The counter-offensive could, however, be short-lived as the Russian-backed Syrian troops continued to chip away at other parts of the rebel bastion, capturing 20 localities.

On Friday, four members of a single family, two of them children, were killed in air strikes, the Britain-based Syrian Observatory for Human Rights said, adding to more than 400 such deaths since December.