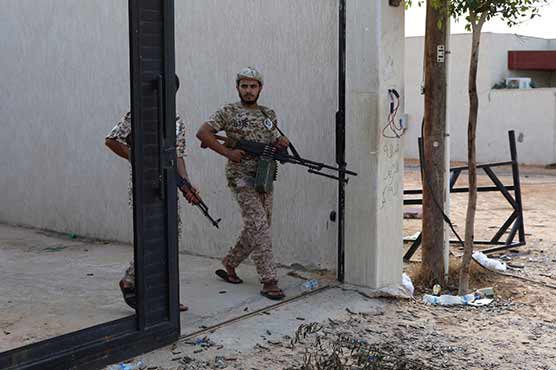 Turkey has beefed up its positions in recent days in Idlib

ISTANBUL (AFP) - Turkey s president accused Russia of committing "massacres" in its support of the Syrian regime on Wednesday, escalating a war of words as Turkish reinforcements arrived on the ground.

Recep Tayyip Erdogan threatened to strike Syrian regime forces "everywhere" if its soldiers come under renewed attack, but Russia hit back and accused the Turks of failing to "neutralise terrorists" in the northwestern province of Idlib.

Turkey has beefed up its positions in recent days in Idlib -- the last rebel bastion in Syria -- with hundreds of vehicles carrying artillery and soldiers arriving in the town of Binnish since last Friday, an AFP correspondent said.

Turkish officials say they have lost 14 soldiers in the past nine days and claim to have killed scores of Syrian regime troops as they try to push back forces loyal to Syrian President Bashar al-Assad.

Syrian forces backed by Russian air strikes have pressed ahead with an offensive to retake Idlib from rebel groups that began in December, despite a 2018 deal agreed between Turkey and Russia in Sochi.

The offensive -- which has retaken numerous towns and a crucial motorway -- has killed hundreds of civilians and sent hundreds of thousands fleeing for safety in harsh winter conditions.

Erdogan s direct criticism of Russia is a rare move.

"The regime, backed by Russian forces and Iran-backed militants, are continuously attacking civilians, committing massacres and shedding blood," Erdogan told a meeting of his ruling party in parliament.

He said Turkey would do "whatever necessary" to push Syrian forces back behind the 12 observation posts it set up in Idlib under the Sochi deal.

"I hereby declare that we will strike regime forces everywhere from now on regardless of the Sochi deal if any tiny bit of harm comes to our soldiers at observation posts or elsewhere," he said.

In return, Russia accused Turkey of failing to honour the 2018 deal, with Kremlin spokesman Dmitry Peskov saying the Turkish side "had taken upon itself an obligation to neutralise terrorist groups" in Idlib.

But "all these groups are mounting an attack on the Syrian army from Idlib and are acting aggressively towards Russian military installations", he added.

Under the bilateral agreements, radical groups were required to withdraw from a demilitarised zone in the Idlib region held by an array of rebels.

The Turkish presidency confirmed the call but did not provide details.

A Russian delegation including military and intelligence officials held two rounds of talks in Ankara this week, but no concrete agreement emerged.

Foreign Minister Mevlut Cavusoglu said a Turkish delegation would now go to Moscow "in the next few days".

"Continuing to work with Russia, we are working to secure a lasting ceasefire. But even if nothing results from this, our determination is clear and we will do what is necessary," he said.

US special envoy for Syria James Jeffrey held closed-door talks with Turkish officials in Ankara over "the humanitarian situation on the ground and the political process" in Syria, a Turkish diplomatic source said.

Turkey, which already hosts some 3.7 million refugees from Syria, fears a fresh influx if Idlib falls to the regime and has kept its border closed to newly displaced people.

As the Turkish leader bared teeth to Damascus over the escalation in Idlib, US forces killed one regime loyalist in the rare clash in the regime-held village of Khirbet Amo, east of Qamishli, said the Syrian Observatory for Human Rights and an AFP correspondent in the area.

The US-led coalition -- in Syria to fight the Islamic State group -- said in a statement their troops returned fire "in self-defence" in response to small arms fire from unknown individuals near a checkpoint occupied by pro-Syrian regime forces.