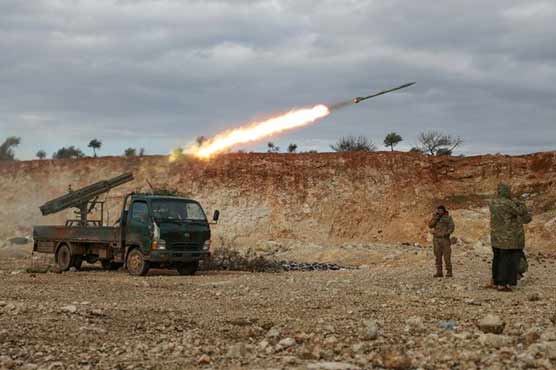 The barrage also wounded five soldiers in the violence-plagued northwest, prompting the Turkish military to respond by "destroying targets", the defence ministry added.

The exchange was the second in eight days and took place in the area of Taftanaz, which was recently reinforced by Turkey, said the Britain-based Syrian Observatory for Human Rights.

The clashes are further straining relations between Damascus and Ankara, while also increasing tension between Russia and Turkey -- the conflict s chief foreign protagonists.

Syrian government forces backed by Moscow have pressed a blistering assault against the last major rebel bastion in Syria s northwest for more than two months.

"The number of people being displaced in this crisis is now spiralling out of control," he told AFP on Monday.

The exodus is one of the largest of the nine-year civil war and risks creating one of the worst humanitarian catastrophes of the conflict.

It has sparked alarm from rebel backer Turkey which already hosts some 3.7 million Syrian refugees and fears another influx.

Turkey s defence ministry said the troops targeted on Monday had been sent "as reinforcement to the region with an aim to prevent clashes in Idlib, ensure our border security, and stop migration and human tragedy".

Since Friday, large convoys of vehicles carrying commandos, tanks and howitzer artillery pieces have reinforced 12 Turkish military posts in Idlib installed by Ankara under a 2018 deal with Russia to stave off a regime offensive.

But the agreement has failed to stop the government s advance, with Turkey saying regime forces have surrounded three of its outposts, despite repeated warnings against such a move.

Fahrettin Altun, Erdogan s top press aide, wrote on Twitter that "Turkey retaliated against the attack to destroy all enemy targets and (avenge) our fallen troops".

Erdogan has given Damascus until the end of the month to retreat from its outposts, and urged Russia to convince the regime to halt its offensive.

A Russian delegation has been in Ankara for talks on Idlib since Saturday, with further meetings expected on Monday.

The two countries have worked closely together despite supporting opposing sides of the war.

The escalation between Turkey and Damascus comes as intense bombardment by the regime and Russia killed 29 civilians in less than 24 hours.

Six children were among nine civilians killed early Monday in raids on the village of Abin Semaan, in Aleppo province where Russian-backed regime forces have been waging a fierce offensive to retake a key highway, the Observatory said.

At the site of the raids, a rescue worker carried a dead girl in a thick blanket, while one of her relatives pleaded for the body, said an AFP correspondent.

Volunteers shivering in near-freezing temperatures dug at mounds of rubble, rescuing a dust-covered man and a child who had been trapped beneath.

The latest air strikes follow a night of heavy bombardment by Russia and the regime that had already killed at least 20 civilians in the neighbouring provinces of Idlib and Aleppo, according to the Observatory.

Around half of Idlib province, along with slivers of neighbouring Aleppo and Latakia provinces remain outside government control.

Some 50,000 fighters are estimated to be in the shrinking pocket, including many jihadists from the dominant Hayat Tahrir al-Sham alliance but mostly their rebel allies, according to the Observatory.

Some three million people, half of them already displaced at least once by violence elsewhere in Syria, live in the area.