US forces withdraw from key base in northern Syria 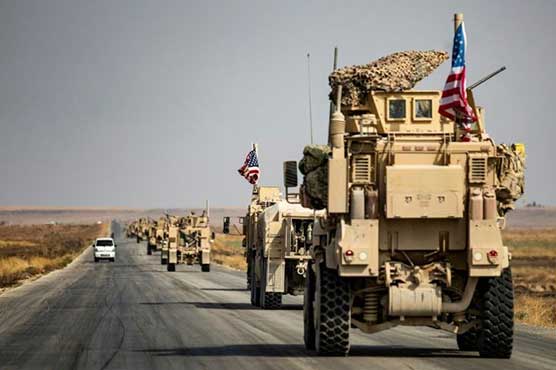 US forces withdraw from key base in northern Syria

Syrian Observatory for the Human Rights said the convoy was evacuating the military base of Sarrin.

(AFP) – US forces withdrew from a key base in northern Syria Sunday, a monitor said, two days before the end of a US-brokered truce to stem a Turkish attack on Kurdish forces in the region.

An AFP correspondent saw more than 70 US armoured vehicles escorted by helicopters drive past the town of Tal Tamr carrying military equipment.

Some flew the American stars-and-stripes flag as they made their way eastwards along a highway crossing the town, he said.

The Syrian Observatory for the Human Rights said the convoy was evacuating the military base of Sarrin.

It appeared to be heading to the town of Hassakeh, further east, said the Britain-based monitor, which relies on sources inside war-torn Syria for its information.

Sarrin "is the largest American military base in the north of the country," Observatory chief Rami Abdel Rahman said.

It is situated on the edges of a planned "safe zone" on the Syrian side of the border that Turkey wants to keep Kurdish forces away from its frontier, he explained.

Sunday s pullout was the fourth such withdrawal of American forces in a week and left Syria s northern provinces of Aleppo and Raqa devoid of US troops, Abdel Rahman said.

The Kurds have been a key ally to Washington in the US-backed fight against Islamic State group jihadists in Syria, but Ankara views them as "terrorists" linked to Kurdish militants on its own soil.

A week ago, the Pentagon said US President Donald Trump had ordered the withdrawal of up to 1,000 troops from northern Syria as Turkish troops advanced into Syrian territory.

Turkey launched a cross-border incursion into Syria on October 9, after Trump said he would pull back US special forces in the Kurdish-held north.

After the violence killed scores from both sides and displaced hundreds of thousands from their homes, a US-brokered ceasefire was announced late Thursday.

Turkey has given the Syrian Democratic Forces, the de facto army of the Kurdish authorities in northeastern Syria, until Tuesday evening to withdraw from a 30-kilometre strip of Syrian land along its southern border.

Both sides accuse each other of violating the truce.