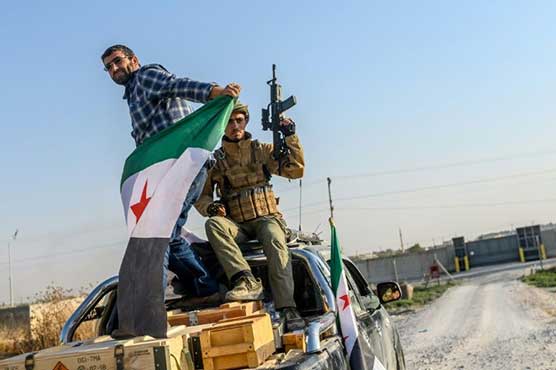 (AFP) – Turkish forces and their proxies pushed deep into Syria Sunday, moving closer to completing their assault s initial phase, while Washington announced it was pulling out 1,000 troops from the country s north.

The Kurdish administration in northern Syria said that Turkish bombardment near a camp for the displaced led to nearly 800 relatives of Islamic State group (IS) members fleeing.

Fighting raged but Turkish-backed forces made significant progress along the border on the fifth day of an offensive that has provoked an international outcry and left dozens of civilians and fighters dead.

Kurdish authorities and foreign powers have warned repeatedly that the hostilities could undermine the fight against the IS and allow jihadists to break out of captivity.

Fighting has engulfed the area since Wednesday when Ankara launched a long-threatened offensive against the Kurdish-led Syrian Democratic Forces (SDF), who it considers "terrorists" linked to insurgents inside Turkey.

US Defence Secretary Mark Esper said Sunday that President Donald Trump had ordered the withdrawal of up to 1,000 troops from northern Syria.

"I can t give a timeline because it changes hourly. We want to make sure that we do so in a very safe, deliberate manner," he told the CBS network.

"And at this point in time in the last 24 hours we learned that they (Turkey) likely intend to expand their attack further south than originally planned and to the west.

Turkey s President Recep Tayyip Erdogan himself, shrugging off the threat of sanctions, said the aim was to establish a "security zone" that would extend 30 to 35 kilometres (20 to 25 miles) into Syria and run from the Euphrates River to the Iraqi border, a stretch of almost 500 kilometres.

Trump has been accused of abandoning a loyal ally in the fight against IS after ordering American troops to pull back from the border, which Ankara took as a green light to move in.

The Syrian Observatory for Human Rights said at least 26 civilians were killed on Sunday in northeast Syria, including an unidentified journalist who died in a Turkish air strike on a convoy of vehicles transporting civilians and journalists.

At least 60 civilians have now died in violence on the Syrian side of the border, with Turkish reports putting the number of civilians dead from Kurdish shelling inside Turkey at 18.

The Kurds said a female Kurdish party official and her driver were among those killed.

Aid groups have warned of another humanitarian disaster in Syria s eight-year-old war if the offensive is not halted.

The UN humanitarian agency OCHA said the exodus sparked by the fighting had grown to 130,000 people and it was preparing for that figure to more than triple.

"We have moved into a planning scenario where up to 400,000 people could be displaced within and across the affected areas," spokesman Jens Laerke told AFP.

Some 12,000 IS fighters -- Syrians, Iraqis as well as foreigners from 54 countries -- are detained in Kurdish prisons, according to official Kurdish statistics.

"The brutal military assault led by Turkey and its mercenaries is now taking place near a camp in Ain Issa, where there are thousands (of people) from families of IS," a Kurdish administration statement said.

"Some were able to escape after bombardments that targeted" the camp. The Kurds also charged its guards had been attacked and the gates of the camp flung open.

It said the Ain Issa camp was "now without guards" and 785 relatives of IS jihadists had fled.

The SDF, a coalition of Kurdish and Arab fighters, was the main partner on the ground in the US-led campaign against IS.

According to the Observatory, at least 104 of its fighters have been killed since the start of the Turkish offensive.

According to Turkish media, Ankara aims to take control of a territory 120 kilometres (75 miles) long and 30 kilometres into Syria, up to the towns of Tal Abyad and Ras al-Ain.

Turkish forces and their proxies captured Tal Abyad on Friday afternoon, which left Ras al-Ain, further east, as the last major target in the offensive.

Turkey announced it had seized the key M4 highway, which looks like it might mark the southern limit of its advance in this initial phase of the invasion.

It lies 30 to 35 kilometres deep in Syrian territory.

SDF fighters have taken mounting losses against the vastly superior military firepower of Turkey, which has defied mounting international protests and the threat of US sanctions in pressing on with its offensive.

Meanwhile Qatar, and the government of national unity in Libya, rejected a statement by Arab foreign ministers condemning Turkey s "aggression" in Syria.

"Qatar is surprised by the unprecedented barrage of criticism by a number of Arab League members against the Turkish military operation in the northern part of Syria bordering the Turkish territories," an official at the foreign ministry in Doha said.

Arab League chief Ahmed Aboul Gheit on Saturday slammed the Turkish attack as an "invasion of an Arab land" while the ministers they would consider diplomatic and economic action against Ankara.