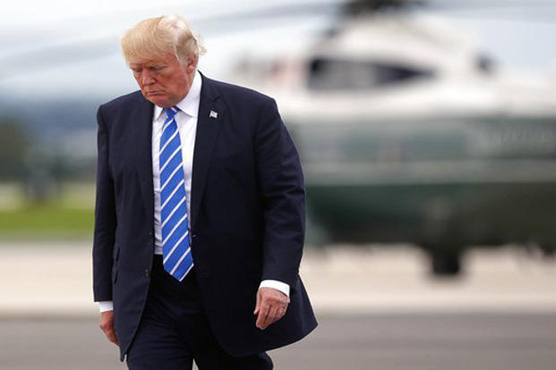 The poll of more than 14,300 people found that the percentage of adults who said they had confidence in the press rose to 48 percent from 39 percent since last November, while confidence in Trump’s administration moved in the opposite direction. Photo: AP

(Reuters) - Americans are increasingly confident in the news media and less so in President Donald Trump’s administration after a tumultuous year in U.S. politics that tested the public’s trust in both institutions, according to a Reuters/Ipsos opinion poll released on Tuesday.

The poll of more than 14,300 people found that the percentage of adults who said they had a “great deal” or “some” confidence in the press rose to 48 percent in September from 39 percent last November. Earlier this year, Trump branded the entire industry as the “enemy of the American people.”

The percentage of those who said they had “hardly any” confidence in the press dropped to 45 percent from 51 percent over the same period.

Confidence in Trump’s administration moved in the opposite direction.

Reuters/Ipsos, which tracked confidence in major institutions every couple of months after the 2016 presidential election, found in late January that 52 percent of Americans had a “great deal” or “some” confidence in the new president’s executive branch. That dropped to 51 percent in the May survey and to 48 percent in the latest poll. Trump took office in January.

The poll also found that the shift in trust was not simply a partisan reaction to a Republican president.

From January to September, the percentage of people who had a “great deal” or “some” confidence in the executive branch dropped 6 percentage points among Republicans and 3 points among Democrats.

The percentage of those who expressed similar levels of confidence in the media rose 3 points this year among Republicans and 11 points among Democrats.

More than other modern presidents, Trump has treated the news media as an opposition party. He has shamed individual reporters by name and responded to unflattering reports as “fake news.”

Every president clashes with the news media, but Trump “has gone a step further in attacking the press and questioning their legitimacy,” said Martha Kumar, a presidential historian who has worked with White House transition teams for Obama and 2008 Republican presidential nominee Senator John McCain.

“What you’re seeing now is a gradual recognition of the importance of the press” at a time when people are still getting used to a new president whose campaign is under federal investigation for alleged collusion with Russia, Kumar said.

Trump has denied any collusion occurred.

Kumar added that confidence in the press may be rising this year because news organizations have offered wildly different perspectives on Trump, satisfying people who like him as well as those who do not.

“They’re not all watching and reading the same things,” she said. “They’re gravitating toward organizations they trust.”

Ari Fleischer, former Republican President George W. Bush’s first press secretary, said any shift in the way people viewed the press and the president was likely the product of an oppositional relationship that both sides had pushed since the 2016 presidential campaign.

“Trump throws fastballs directly at the press’ head. He does it almost every day,” Fleischer said.

“This makes those who oppose Trump draw into the press,” elevating its stature among those who would otherwise not trust the media, he said.

“But the press has played into it by the mistakes they’ve made, by missing the rise of Trump, by being too liberal,” Fleischer added. “They’ve helped create this environment.”

The public placed its highest levels of confidence in the military, law enforcement and academia, according to the latest poll that ended on Sept. 5. Americans lost confidence this year in the executive branch and in Congress, while their confidence rose for most other institutions, including the press and academia.

The Reuters/Ipsos poll was conducted online in English throughout the United States. It ran three polls this year on confidence in major institutions: between Jan. 24 and Feb. 7, May 11 to May 21 and from Aug. 24 to Sept. 5.

It collected a combined 14,328 responses from those polls, and the data has a credibility interval, a measure of accuracy, of 2 percentage points.