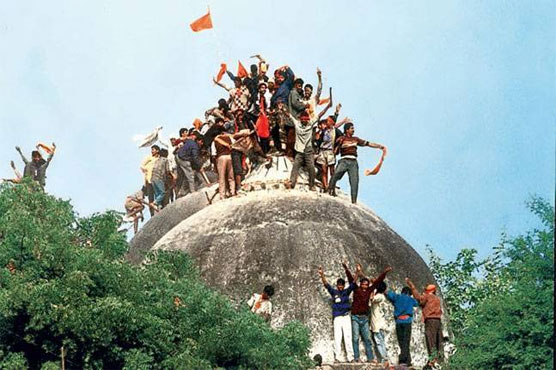 The Supreme Court has said the trial should wrap up in two years.

NEW DELHI (AFP) - Three senior members of India’s ruling Hindu nationalist party including a government minister should face trial over the demolition of a mosque a quarter of a century ago, the Supreme Court ruled on Wednesday.

The three are accused of inciting Hindu zealots to pull down the 16th century Babri mosque in 1992, igniting one of India’s most explosive religious disputes in which thousands died.

The ruling came after a lower court dropped the charges brought against them by India’s Central Bureau of Investigation (CBI), kicking off a series of appeals and counter-appeals.

"We have allowed the CBI appeal against the Allahabad High Court judgement with certain directions," the Press Trust of India news agency quoted the Supreme Court judges as saying.

Some in the BJP, which recently won elections in India’s largest state Uttar Pradesh, want to build a temple to Ram on the ruins of the razed mosque -- an idea that horrifies the state’s significant Muslim minority.

Indian media said the charges would scupper the chances of Advani, now 89, of becoming India’s next president when the role becomes vacant later this year. He was present on the day of the demolition, which sparked nationwide riots and thousands of deaths and came to define his political career.

However, in a later interview with the BBC, he said the incident had hurt him "tremendously" and should never have happened.

There was no immediate reaction from the BJP, but the opposition Congress said the ruling party had "tried every trick in the book" to ensure that Advani, Bharti and Joshi did not face charges.

"What they (Supreme Court) have said today means there’s clinching evidence that needs to be now argued out in the court," said party spokesman Sanjay Jha.

The court also ruled that a fourth senior BJP politician, Kalyan Singh, who was leader of Uttar Pradesh at the time of the incident, should face criminal conspiracy charges. His trial, however, will be delayed until his stint as governor of Rajasthan state is over because the position of governor gives him immunity from prosecution.

In March, Indian Supreme Court suggested for an out-of-court settlement of Babri Masjid and Ram Mandir dispute. The demolition of the mosque by Hindu mobs in 1992 triggered some of India’s worst riots that killed about 2,000 people. Cases were registered against many culprits including notable figures like Kalyan Singh, the then Chief Minister of Uttar Pradesh, Shiv Sena-head Bal Thackeray and L. K. Advani. Yet, no judgment has been passed till date on this barbaric attack.

Hindus wants to build a temple on the site. Muslims want the mosque rebuilt after it was demolished in 1992. The case has been languishing in India’s sluggish legal system for almost 25 years.

Iran to build military base on port connected to Pakistan border