School hopes lights can finally shut off after costly glitch 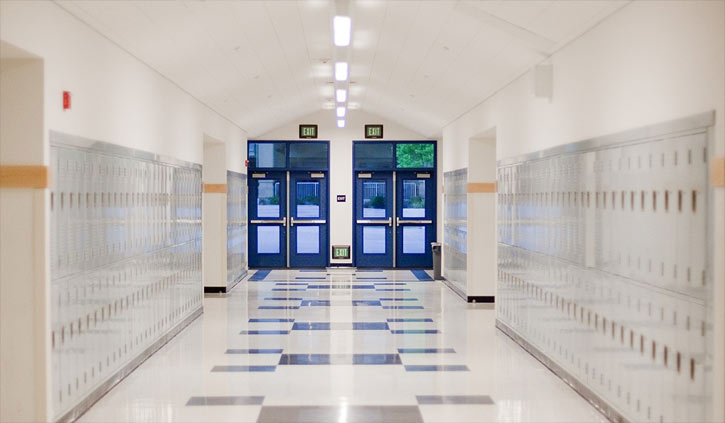 School hopes lights can finally shut off after costly glitch

The school serves about 1,200 students from the towns of Wilbraham and Hampden.

WILBRAHAM (Web Desk) - It’s hoped that the lights at a Massachusetts high school will be able to be turned off by the end of next month, about a year-and-a-half after a computer glitch kept the lights on night and day, officials say.

The unusual challenge faced by Minnechaug Regional High School, located in the western Massachusetts town of Wilbraham, means there has been no way to turn the lights off short of unscrewing bulbs or flipping circuit breakers that leave entire sections of the building in the dark.

“We are very much aware this is costing taxpayers a significant amount of money,” Aaron Osborne, an assistant superintendent of finance at Hampden-Wilbraham Regional Schools, told NBC News. “And we have been doing everything we can to get this problem solved.”

Osborne estimated the extra cost to the district for the nearly 7,000 lights in the 248,000-square-foot building is in the thousands of dollars a month, but “not in the tens of thousands.”

The school serves about 1,200 students from the towns of Wilbraham and Hampden.

The situation has drawn the attention of Saturday Night Live, which mentioned the lights-on challenge during the Weekend Update segment of its Jan. 21 broadcast.

In a November 2021 story, the school’s student newspaper, The Smoke Signal, reported that a computer server that controlled what was supposed to be a lighting system designed to save power, failed in August 2021 and could not be fixed.

The school reached out to the original installer and found the company had changed hands several times. Global supply chain issues kept delaying efforts to get the parts needed to fix the system.

In a Monday email, Osborne said officials had thought the repair could cost $1.2 million, which would have entirely replaced the system. Now the actual cost of fixing the system by replacing lighting panels and the server, while updating the software, will be between $75,000 and $80,000.

As of October, the new equipment has been received and installed. It had been hoped the software could have been updated last month, but it was delayed.

“At this point, it is just the software transition that was missed in December and is now rescheduled for February,” Osborne said.

He said that while the lighting issue has been receiving the most attention, the school has been coping with other supply chain issues over the last three years, including finding enough computers for all the students.

Paul Mustone, the president of the Reflex Lighting Group, which now owns the company that originally installed the system in 2012, said they are ready to go next month.

“And yes, there will be a remote override switch so this won’t happen again,” he said.