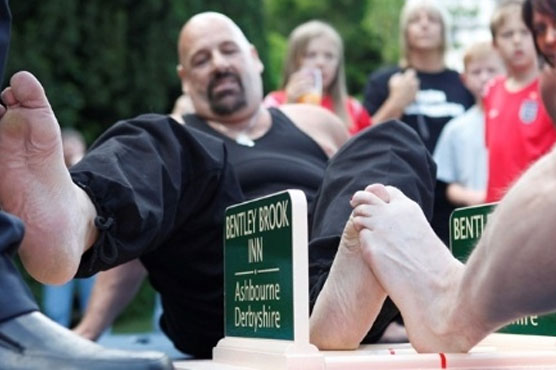 With their feet on a small square ring, the competitors begin by locking their big toes together.

(Reuters) - At a pub in rural England, Alan "Nasty" Nash is exercising his toes before he gets into the fighting ring. Draped in a Union Jack flag, the competitor is preparing for the most brutal of bouts to retain his title -- World Toe Wrestling Champion.

Beside him, fellow contestants are having their bare feet massaged before their matches begin.

The Derbyshire village of Fenny Bentley in northern England hosted the World Championship for Toe Wrestling at the weekend in a competition that drew male and female fighters as well as spectators of all ages for some serious toe-tussling.

Toe wrestling traces its roots to 1976 when Staffordshire pub landlord George Burgess sought to find a new sport for Brits to dominate, according to the Bentley Brook Inn where the championship took place.

"I just love the fact that this is the one sport that England always win at, we get hammered at everything else," Nash said.

"My technique ... is to hurt the first person that comes into the ring with me: hurt them bad and terrify everyone else."

There are two participants in each bout. With their feet on a small square ring on the floor, the competitors begin by locking their big toes together, before battling arm-wrestling style to drive their opponent s foot to the ground. Toe inspections are a must and mixed sex matches are not allowed.

"There have been some dirty toed tactics,  flicking off  is one of them," organizer Edward Allington said.

"If you know you re going to lose, if you pull your toe away then it s difficult for the referee to decide if it s accidental or deliberate."

Nash beat Michael "Grimbo" Grimmett to claim his 12th World Title. On the women s side, a competitor known as "Tracy Tippy Toe" took the title.

Shake hands with client, get arrested for fornication: Welcome to Iran