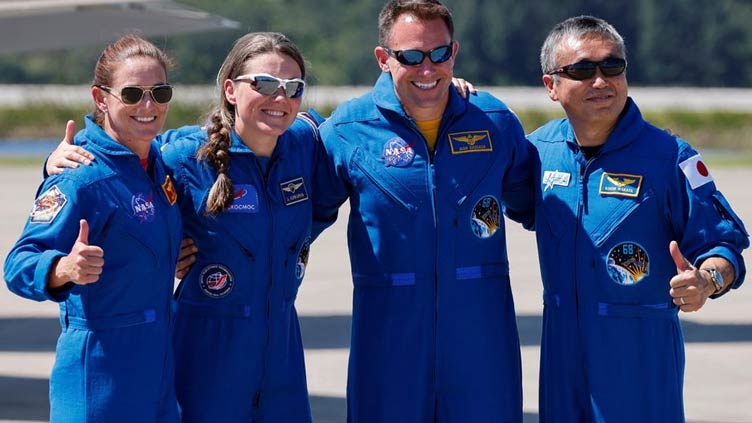 NASA hopes to keep the ISS running with its existing partners until roughly 2030.

CAPE CANAVERAL (Reuters) - Elon Musk’s rocket company SpaceX was due to launch the next long-duration crew of the International Space Station into orbit on Wednesday, with a Russian cosmonaut hitching a ride with two Americans and a Japanese astronaut as part of the mission.

The four-member crew should reach the International Space Station (ISS) about 29 hours later on Thursday evening to begin a 150-day science mission aboard the orbital laboratory some 250 miles (420 km) above Earth.

The mission, designated Crew-5, marks the fifth full-fledged ISS crew NASA has flown aboard a SpaceX vehicle since the private rocket venture founded by Tesla-owner Musk began sending U.S. astronauts aloft in May 2020.

The latest team is being led by Nicole Aunapu Mann, a veteran combat pilot making spaceflight history as both the first indigenous woman being sent to orbit by NASA and the first woman to take the commander’s seat of a SpaceX Crew Dragon.

The Crew-5 mission is also notable for the inclusion of Anna Kikina, 38, the lone female cosmonaut on active duty for the Russian space agency Roscosmos, and the only Russian yet to fly aboard an American spacecraft amid global tensions over the war in Ukraine. The last cosmonaut to ride a U.S. rocketship to orbit was in 2002 on a NASA space shuttle.

FROM RUSSIA WITH LOVE

Kikina is essentially swapping places with a NASA astronaut who took her seat aboard a Russian Soyuz flight to the ISS last month under a new ride-sharing deal signed by NASA and Roscosmos in July.

Kikina will be only the fifth Russian woman sent to space in a historically male-dominated cosmonaut corps.

"In general, for me, it doesn’t matter," she said in a recent interview, shrugging off the novelty of her Roscosmos stature. "But I realize the responsibility for it because I represent the people of my country."

As a registered member of the Wailacki of the Round Valley Indian Tribes, Mann will become the first Native American woman to fly to space. The only other indigenous American launched to orbit was John Herrington, who flew on a 2002 shuttle mission.

Rounding out the crew from Japan’s space agency JAXA is veteran astronaut Koichi Wakata, 59, a robotics expert making his fifth voyage to space.

The Crew-5 team will be welcomed by seven existing ISS occupants - the Crew-4 team consisting of three Americans and an Italian astronaut - as well as two Russians and the NASA astronaut who flew with them to orbit on a Soyuz flight.

The new arrivals are tasked with conducting more than 200 experiments, many of them focused on medical research ranging from 3-D "bio-printing" of human tissue to the study of bacteria cultured in microgravity.

ISS, the length of a football field and largest artificial object in space, has been continuously occupied since November 2000, operated by a U.S.-Russian-led consortium that includes Canada, Japan and 11 European countries.

The outpost was born in part to improve relations between Washington and Moscow following collapse of the Soviet Union and the end of Cold War rivalries that spurred the original U.S.-Soviet space race.

But NASA-Roscosmos cooperation has been tested as never before since Russia invaded Ukraine in February, leading the Biden administration to impose sweeping sanctions against Moscow.

During a news briefing with NASA and SpaceX on Monday, a high-ranking Roscosmos official, Sergei Krikalev, said his agency has Moscow’s approval to continue with ISS until 2024 and hopes to secure Kremlin "permission" to extend the partnership further, until Russia builds a new space station.

NASA hopes to keep the ISS running with its existing partners until roughly 2030.