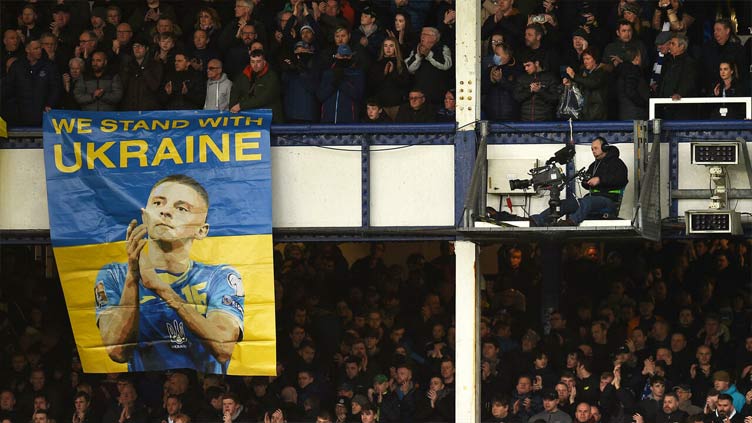 BEIRUT (AFP) - Russia s war on Ukraine has drawn unprecedented sanctions that have seen it banned from most international sports in a Western-led break with the long-standing convention against politics mixing with sport.

For many Arabs, who have seen their own sportsmen and women punished for refusing to compete with Israelis in protest at successive wars, the exception made for a European conflict smacks of double standards.

Egyptian squash champion Ali Farag said "nobody should be happy about what s going (on in Ukraine)".

"We ve never been allowed to speak about politics in sports but all of a sudden now it s allowed," he said this month.

"Now that it s allowed, I hope that people also look at oppression everywhere in the world.

"The Palestinians have been going through that for the past 74 years but I guess because it doesn t fit the narrative of the media of the West, we couldn t talk about it."

Formula One suspended its contract with Russia, barring it from hosting its Grand Prix in Sochi.

Accompanying the bans was an officially sanctioned outpouring of support for Ukraine.

The blue and yellow colours of its national flag were displayed at all English Premier League matches in the first weekend of March in a show of solidarity.

It has been a remarkable transformation for a sports establishment long so wedded to the idea of keeping politics out at all costs.

"International sports associations, including FIFA, have banned any political or religious expression on the sports field," said James Dorsey, a senior fellow at the National University of Singapore s Middle East Institute.

"What they have done now is they effectively have lifted that for Ukraine. There is Palestine of course, but what about Yemen? Syria? Libya?"

In the past, sports governing bodies have tolerated some exceptions to the general ban on making political statements, but they have all been short-lived.

During a flare-up of fighting between Israel and Palestinian armed groups in Gaza last May, England s Football Association said players would not be punished for raising the Palestinian or Israeli flags.

But in November, FIFA fined the Scottish Football Association 10,000 Swiss francs (about $10,700) after Scotland fans booed Israel s anthem and raised Palestinian flags during an October match between the national sides.

The head of the Palestinian Football Association, Jibril Rajoub, urged FIFA to commit to applying its standards equally.

"There are Israeli clubs registered in the Israel (Football) Association and registered on occupied (Palestinian) territories since 1967," he said.

"This contravenes the laws of the United Nations, but FIFA does nothing."

Several of the Jewish settlements that Israel has built in the West Bank since 1967 in contravention of international law have football clubs that the Palestinian FA says should be banned from competition unless they relocate inside Israel.

At the Tokyo Olympics in July, Algerian judoka Fathi Norine refused to face off against an Israeli opponent out of solidarity with the Palestinians, earning him and his trainer 10-year bans.

But on February 27, the International Judo Federation suspended Russian President Vladimir Putin as its honorary president and ambassador over his invasion of Ukraine.

In early March, Palestinian midfielder Mohamed Rashid refused to stand with his Indonesian club Persib Bandung when they raised a sign reading "Stop War" at a game.

"I am against any war in any country, but people are dying every day in Palestine and in Syria and Yemen," he said in video remarks published by an Egyptian sports website.

"When war erupted in a Western country, everyone stood with it, but when people die in Palestine, we are not allowed to show solidarity and are accused of mixing politics and sports.

"It makes us feel like our lives are cheaper than the lives of those in the West."

Dorsey said keeping politics out of sports was always an impossible goal.

"The idea that politics and sports are separate is fiction. They are Siamese twins inseparably linked at the hip.

"The only solution is to acknowledge the relationship."

But in a region where sports governing bodies have long been dominated by political notables, like Asian Football Confederation president Sheikh Salman bin Ibrahim al-Khalifa, a Bahraini royal, politics can be a two-edged sword.

"FIFA has been a pillar of Arab autocracy for decades. You want to claim double standards? You have got to be careful because you are sitting in a glass house," Dorsey said.