Dozens killed in flash floods and land-sliding across the country 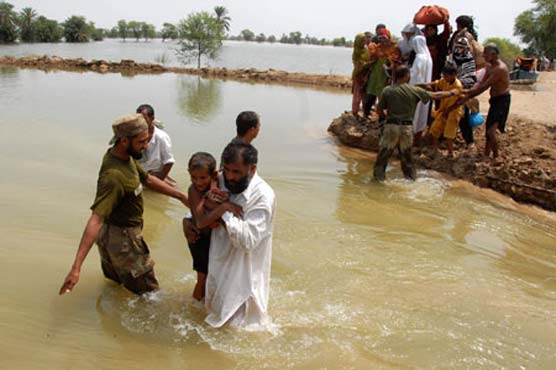 Dozens killed in flash floods and land-sliding across the country

Pakistan is amongst those that stand to be most adversely affected by global warming.

ISLAMABAD - At least 71 people have been killed and scores of them are injured as torrential rains, mudslides and landslides continue to play havoc in Pakistan, the National Disaster Management Authority (NDMA) informed in a press release.

The authority informed that the death toll in the rain related incidents have increased to 47 and as many as 14 people have died in Shangla, 12 in Kohistan and 8 in Swat. Moreover, 141 houses have also been damaged due to rain-related incidents, landslides and avalanches in different parts of the country. These include 77 in KP, 36 in Fata and 73 in Azaad Jammu and Kashmir (AJK).

The NDMA authorities said in a statement that the majority of these deaths and injuries were caused by collapsing of the buildings since they are poorly built; particularly in rural areas, the buildings are most susceptible to collapse during heavy spring rains. Landslides caused widespread damage to roads and communication infrastructure in the Pakistani side of Kashmir, NDMA officials reported.

One of the worst-affected districts is the Swat Valley, northwest of the capital, Islamabad, where 121 mm (4.76 inches) of rain fell on Sunday- wrecked havoc on the infrastructure in the area, washing away roads, bridges, leaving key arteries choked, and causing massive power failure in significant swathes of Malakand.

The people of Katcha areas specifically, are most by the floods that have damaged millions of trees, fields and livestock, causing hardships for the people and forced them to leave their homes from the low lying areas to upper areas.

According to Dunya News, as many as 2 villages have been destroyed completely in Muzaffarabad, where the villagers are now under an open sky without any shelter, waiting for their incompetent government to rescue its citizens. However, as usual the government rushed into panic mode after the tragedy; clearly, it had nothing to study the ways and means in which the disaster could have been mitigated.

In Pakistan, climate change issues get the lowest priority, despite the country’s vulnerability to its devastating impacts. On the one hand, there is a need to protect vulnerable communities from climate-related disaster; on the other, there is the reality of climate change.

Despite being the lowest contributor of green house gas emission Pakistan is said to be one of the most affected countries by climate change and according to Deputy Special Representative for the Paris Climate Conference Ambassador Philippe Lacoste, Pakistan needs international cooperation to address the challenge. The worst flooding in the past 80 years occurred in 2010, when flooding in Pakistan resulted in more than 1,700 deaths and widespread damage.

Besides, Pakistan also faces looming water shortages in the future, which sounds like a death knell for a largely agriculture-based economy. Recently Asian Development Bank’s (ADB) director warned that Pakistan will face water scarcity within next three years as the water available per capita has decreased to 1068 cubic meters in 2013 from 5,000 cubic meters (m3) in 1950. Pakistan is fast approaching the global water scarcity threshold which is 1,000 m3.

Recently a report released by UK-based agency “WaterAid” on the eve of World Water Day revealed that Pakistan is among the top 10 countries with the greatest number of people living without access to safe water. The report mentions that “Around 16 million people in Pakistan do not have access to clean drinking water; they have no choice but to collect water form unsafe sources”. The report also mentions that 22,000 children die every year from diarrhea caused by unsafe water and poor sanitation in Pakistan.

The Participatory Development Initiatives PDI Director, Sikander Brohi, said that 82,802 people had lost their lives – the largest number of deaths in the region – as a result of different disasters in Pakistan from 2005 to 2014 while 49,784,339 people were affected during the same period.

“Disaster management systems at federal and provincial levels have failed in preventing or minimizing disaster losses due to overlapping of the roles and responsibilities, and low priority and low budget for disaster management in Pakistan,” he said.

PPP provincial president, Mian Manzoor Watoo said that due to the thunderstorm and hailstorms the crops of maize and wheat on thousands of acres of the villages of Depalpur from Bahawaldas to Boman and other numerous villages have also faced destruction.

He urged the government to without any further delays, take notice and announce relief packages for the affectees of the disaster. While commenting on the Kissan package of Rs 100 millions of the chief minister, Mian Manzoor Wattoo said the package was no different from the PM Kissan package of Rs 341 billion.

PPP provincial president maintained that the farmers are devastated economically due to the losses inflicted by the fifth successive wheat crops, solely attributed to the anti-farmers policy of the PML-N government.