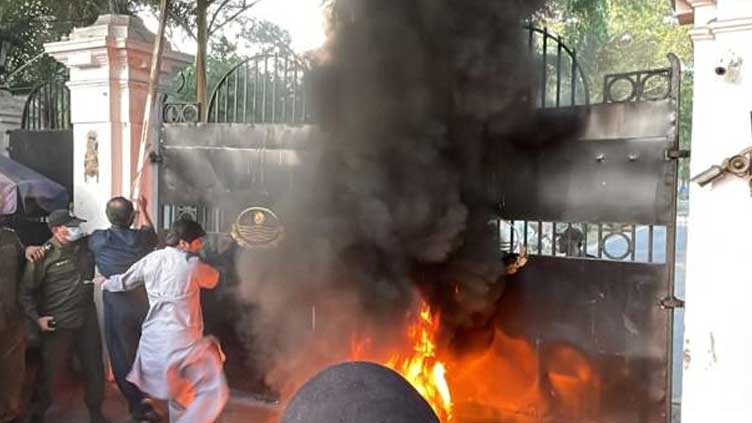 ISLAMABAD/LAHORE (Dunya News) – Thousands of agitating workers of the Pakistan Tehreek-e-Insaf (PTI) on Friday took to the streets following the protest call by the party leaders after former prime minister Imran Khan, other party leaders were wounded in gunshots fired at the long march container.

It may be recalled that the firing incident happened during the long march reception camp at Allahwala Chowk in Wazirabad. District police officer Ghazanfar Ali said one person was killed and ten others were wounded in the attack.

In his initial statement, the alleged attacker said that he suddenly decided to assassinate Imran Khan because he was misleading people. The attacker also said that no one is behind his act, adding that he has done this alone.

In a statement, Islamabad police said that some protesters have gathered at Rawalpindi’s Faizabad area carrying sticks, slingshots and stones, adding that the presence of armed people is also suspected among these protesters. The protesters pelted riot police with stones, the police confronted protesters and fired tear gas to disperse them. Police also said that the protesters also include children and urged the public to stop their children taking part in unlawful activities.

In Karachi, the citizens staged protest in several areas of the metropolis and chanted anti-government slogans which led to the arrest of several workers. The police baton-charged protesters and fired tear gas shells at the protesters on Shahrah-e-Faisal to ensure their dispersal.

In Lahore, the PTI workers converged outside Governor House, chanted slogans against government and burn tyres. Police dispersed the protesters, however, the protesters were still present at The Mall and blocked road for traffic. They also tried to jump over the official residence s gate and threw burning tyres inside.

The protesters said that the country’s constitution give them right to protest peacefully and Imran Khan is the most popular leader of the country. They said the PTI chairman won by-elections on seven seats without running a campaign.

Punjab Bar Council also held protest demonstrations across the province and boycotted court proceedings. The statement said that the attack on the former PM is a failure of the institutions responsible for providing justice and security and the lawyers’ fraternity will not appear in courts in protest.