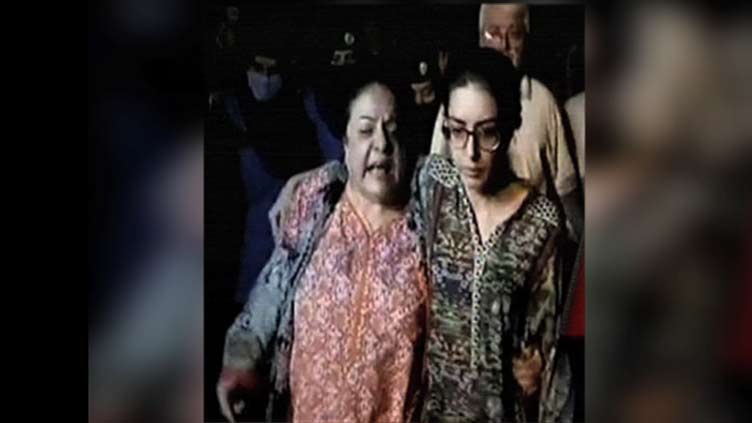 During the proceeding, while giving his remarks during Justice Athar Minnallah remarked that what happened to Shireen Mazari is unfortunate but there were worse incidents when she was in government and no action had been taken on enforced disappearances and such incidents will happen when the constitution is not respected.

The IHC CJ observed that every government had a regrettable attitude towards constitutional violations, adding that a Member of the National Assembly is still in jail today. It is unfortunate that even during the previous regime, members of the assembly were arrested.

“Until an inquiry is complete, Shireen Mazari should be released.”

Mazari said that the police dragged her out of the car and there were people in plain clothes with the police, adding that she is 70 years old and sick. “The police are fully responsible for the violence," Mazari said and they were taking me to Lahore.

The PTI leader said that the whole nation has come out against the thieves, adding that she was not shown any warrant during the arrest. “I was tortured during the arrest and my nails were broken.”

Speaking before appearing in court, Mazari said that the police had dragged her out of the car. She said that PM Shehbaz Sharif and Rana Sanaullah were behind her arrest, adding that her cellphone has not been returned yet.

“I m fine, I felt the enforced disappearance myself today,” the former minister said, adding that she asked the police to call her daughter, but she was not allowed. “I will tell the court everything that happened to me,” she added.

Earlier, the Islamabad High Court (IHC) had ordered to produce Pakistan Tehreek-e-Insaf (PTI) leader Shireen Mazari before the court after a petition was filed by her daughter Imaan Mazari against the arrest of PTI leader.

It may be recalled a team of the Anti-Corruption Establishment and Police in a joint operation in the Federal Capital on Saturday took former federal minister and Pakistan Tehreek-e-Insaf (PTI) leader Shireen Mazari in custody in alleged land grabbing case dating back to 1972, Dunya News reported on Saturday.

Former Information Minister Fawad Chaudhry, in a tweet, said that he has received reports that Shireen Mazari has been arrested by Anti-corruption Punjab. Fawad further said that former Human Rights Minister was arrested from outside her residence.

My mother has been  kidnapped : Imaan Mazari

Talking to media along side Former Information Minister Fawad Chaudhry and PTI senior leader Shibli Faraz, Imaan Zainab Mazari while expressing much stress and worry for her mother said that my mother has been illegally and unconstitutionally kidnapped. She exclaimed that she won’t let go, if anything happened to her.

She further added that if the government will take such moves, I will be following them. My mother has been forcibly taken away.

Prior to to this, in a tweet she explained that the extent of her information is that the Male police officials have beaten her mother and taken her away. All she know is that the action has been taken by the Anti-Corruption Wing Lahore.

It’s not an arrest but kidnapping: Fawad Chaudhry

He said that the PTI leader was tortured. Her clothes were torn and she was brutally taken away in a car. The Former Federal Minister exclaimed that it’s not an arrest but kidnapping.

Fawad Chaudhry expressing further concern stated that they no clue where Shireen Mazari has been taken away. He taking a strong stance on the matter said now if there is to be a fight, there must be a fight.

Along with being a leader of a big party, Shireen Mazari is also a teacher, he added.

Fawad Chaudhry said the PTI leader Shirin Mazari is respected in the world for her involvement in the education sector.