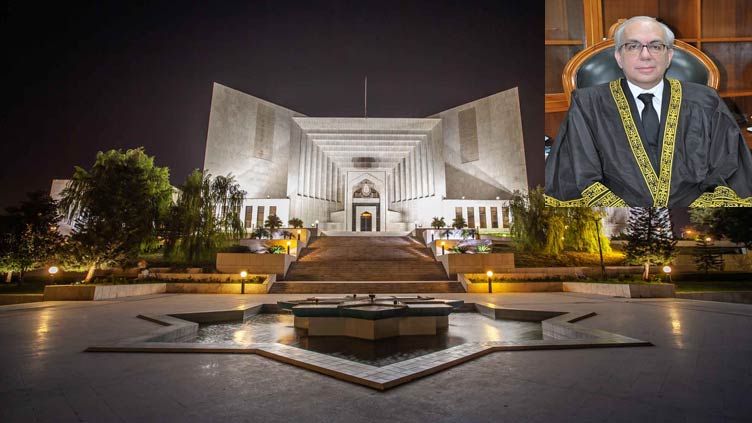 ISLAMABAD (Dunya News) – Chief Justice of Pakistan (CJP) Justice Umar Ata Bandial, while hearing the case regarding interpretation of Article 63-A, remarked that they wanted to give their opinion on Article 63-A as soon as possible as the country must be steered towards mature democracy and the politicians will have to make sacrifices for this purpose.

During the proceedings, presenting his arguments, PTI counsel Ali Zafar said that the inclusion of 63-A was aimed at eliminating horse trading, adding that violation of Article 63-A was unconstitutional to which the Justice Munib Akhtar remarked that the "honourable way out for dissident lawmakers is to resign and go home".

Ali Zafar argued that the vote cast in violation of Article 63-A would not be counted and the law applied to the members of political parties, not independent candidates. The purpose of including 63A in the constitution was to eradicate the cancer of deviation.

The hearing of the case was adjourned till after Eid.

On Wednesday, the CJP remarked that the purpose of Article 63A is to ensure loyalty to the party and disqualification is a trivial matter.

the CJP observed that there has been only one case of Article 63A since 1998, which means that the party chief has not taken this article seriously.

Justice Munib Akhtar remarked that not abiding by one’s oath amounted to "dishonesty", adding that a dissident is elected on a ticket from a particular political party.

"Cancer is when the body’s cells begin destroying the body," he commented, adding that deviation from the party had also been called a cancer.

The counsel of the PPP Farook H Naek while presenting his arguments said that Article 63-A was made a part of the Constitution via the 14th Amendment and it gave broad powers to party heads.

The Election Commission of Pakistan (ECP) did have not have the authority to reject the party head’s decision prior to a presidential order amending Article 63-A in 2002 that reduced the powers of party heads, the PPP counsel said.

Farooq H Naek said that the reason that no reference was filed under Article 63-A is flexibility in politics, which leads to severe anarchy.

Justice Ijazul Ahsan observed that Article 62(1)(f) did not specify the length of disqualification but its interpretation was provided by the SC to which Farooq H Naek said that the legislators did not determine the disqualification for a deviant member in Article 63-A.

Justice Umar Ata Bandial remarked that on four points in Article 63-A, compliance to the party’s policy has been stressed and loyalty is basic constitutional principle and Article 63-A was meant to ensure loyalty with the party.

Justice Jamal Khan Mandokhel remarked that severe punishment like disqualification cannot be given without trial. He added that an independent candidate who joins the party after winning does not take an oath swearing allegiance to the party.