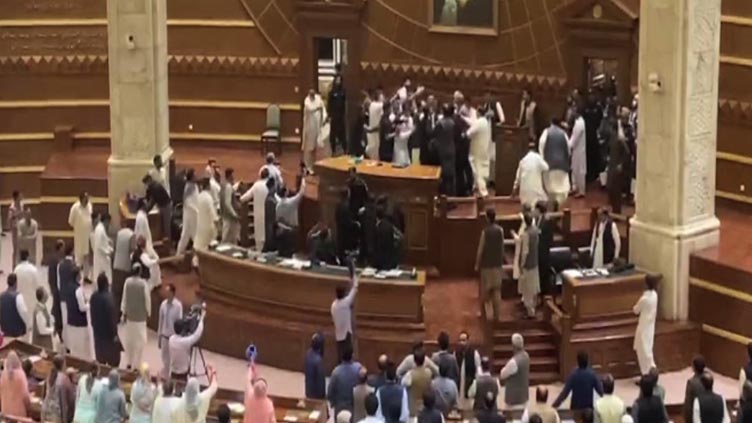 According to details, PTI lawmakers manhandled and threw "lotas" at Deputy Speaker, who also belongs to their own party.

Dost Muhammad Mazari left the hall after the incident.

The PTI lawmakers caused a ruckus inside the assembly when they brought "lotas" to the house and started chanting "lota, lota" (turncoats) as they lashed out at dissident PTI MPAs who parted ways with the party and decided to support the Opposition.

Prime Minister Shehbaz Sharif, in a tweet, said that attack of members of treasury benches on Deputy Speaker inside Punjab Assembly must be condemned in strongest terms possible.

This blatant display of violence and hooliganism is fascism, pure and simple, he added.

The premier further said that Imran Khan desperation and incitement to violence is rupturing our society and he is attacking democracy itself.

It merits mention that PML-Q’s Chaudhry Pervez Elahi, who is also supported by PTI, had expressed doubts on the role the deputy speaker and said that despite being the speaker, he was not the custodian of the house today as he is a contender for the chief minister’s slot.

However, more than 24 members of PTI Punjab Assembly have defected and joined the opposition. Tareen group, Aleem Khan and Asad Khokhar along with their supporters have announced support for Hamza Shahbaz.