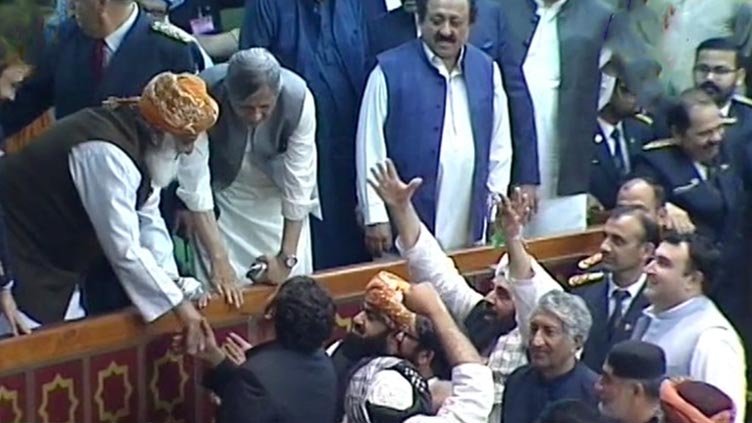 ISLAMABAD (Dunya News) – As per precedent of the Prime Ministers (PM) of Pakistan, Imran Khan was also sent packing without being given the opportunity to complete his tenure, Dunya News reported on Sunday.

According to details, the former Prime Minister (PM) Imran Khan has served for 3 years, 7 months and 22 days.

It merits mention here that the opposition parties in the National Assembly defeated the ruling Pakistan Tehreek-e-Insaf (PTI) government in the no-confidence resolution they jointly moved against Prime Minister Imran Khan with 174 votes, setting a new precedent in parliamentary history of the country for in-house change through a democratic and constitutional manner.

It is the first-ever succeeding no-confidence motion in parliamentary history of Pakistan through which a sitting prime minister has been removed as in the past two such moves had failed.

The first resolution was moved in 1989 against the then prime minister Mohtarma Benazir Bhutto and the second in 2006 to oust PM Shaukat Aziz, but they both had survived the vote.

Shehbaz vows not to indulge in politics of  revenge

Taking the floor after the passage of no confidence resolution against Imran Khan, President PML-N Shehbaz Sharif expressed the commitment to take forward the country and make it a great nation whilst forgetting bitterness of the past.

"I don’t want to go back to bitterness of the past. We want to forget them and move forward. We will not take revenge or do injustice; we will not send people to jail for no reason, law and justice will take its course," Shehbaz said.

"Neither I, nor Bilawal, nor will Maulana Fazlur Rehman interfere. Law will be upheld and we will respect the judiciary," Shehbaz said.

Shehbaz Sharif said we want to health the woes and wounds of the nation. We will not take revenge from anybody. He said there will be no injustice or excesses and innocent people will not be sent behind the bars. He however, said that the law will take its course.

The PML-N President said we respect the judiciary. He vowed to run the affairs of the country in consultations and taking along the institutions.

Shehbaz Sharif also thanked other allied parties for demonstrating unprecedented unity, solidarity and discipline. He was confident that this unity will again build Pakistan.

Nothing is impossible : Bilawal gives message to youth

After Shehbaz, Bilawal took the floor and congratulated the house for passing a no-trust resolution against a premier for the first time in history.

"On April 10,1973, this house approved the Constitution. On April 10, 1986, Benazir Bhutto ended her exile and returned to Lahore for her struggle against Gen Ziaul Haq," Bilawal recalled.

"Today is April 10, 2022, and the one we had declared selected, the non-democratic burden this country was bearing for the past 3 years, today, April 10, 2022, welcome back to purana (old) Pakistan."

The lawmaker from Larkana said that he had joined the National Assembly only three to four years ago, adding that whatever he has learned during this time is probably more than he had learnt throughout his life.

“I have a message for the Pakistani youth that they should never give up on their dreams as nothing is impossible. Democracy is the best revenge. Pakistan Zindabad,” said Bilawal.

Pakistan Tehreek-e-Insaf (PTI) leader Ali Muhammad Khan lauded the struggles of Imran Khan and said that he was proud that the person he was still supporting — Imran Khan — decided to give up power, but refused to be enslaved.

As soon as Asad Qasier resigned, all government members but Ali Muhammad Khan had walked out of the house and boycotted the session.

As the lone voice in the house supporting Imran Khan, Ali delivered a fiery speech and reminding the former opposition of his leader’s achievements.

"Your faces (Opposition members) might be reflecting happiness and may Allah keep it that way [...] my duty as the minister for parliamentary affairs has finally ended," Khan said.

Khan questioned what sort of a "Jewish agent" was Imran Khan that "America left no stone unturned to remove him from power".

The PTI leader said everyone needs to join hands to move and help Pakistan progress, but his party was not ready to follow the ways of the Opposition.

"Bilawal, years ago your grandfather gathered the Muslim ummah in Islamabad. He did it once, but my leader gathered [the ummah] twice in two months.”

Imran Khan’s fault was that he talked about an independent foreign policy and I often say that Russia is just an excuse and Imran Khan is the real target," he claimed.

This time is more of a test than reward, says Khalid Maqbool

MQM-P Convener Khalid Maqbool Siddiqui said this occasion is not merely to celebrate “but show gratefulness as this time is more of a test than a reward.”

He hoped that the alliance between the joint Opposition and the change of regime does not convert into a change of behaviour of the Opposition leaders.

Siddiqui said that it is now the responsibility of the Parliament to move forward and reinstate the confidence that the leaders have received after the success of the no-confidence motion to the people of Pakistan.

“We neither want Naya Pakistan nor do we want Purana Pakistan, we want a better Pakistan,” the MQM-P leader reiterated

It merits mention that the opposition parties in the National Assembly on Sunday defeated the ruling PTI government in the no-confidence resolution they jointly moved against Prime Minister Imran Khan with 174 votes, setting a new precedent in parliamentary history of the country for in-house change through a democratic and constitutional manner.

In the 341-seat House (excluding a seat that fell vacant due to demise of MNA Khayal Zaman Orakzai), the unified opposition secured 174 votes after Member of Panel of Chairpersons Ayaz Sadiq asked for the simple division in favour and against the resolution for physical-count of the members.