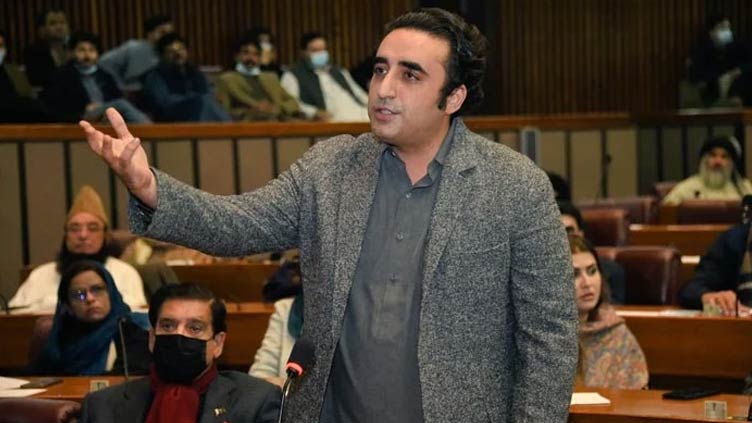 ISLAMABAD (Dunya News) – Pakistan Peoples’ Party (PPP) Chairman Bilawal Bhutto Zardari addressing the National Assembly has said that the Speaker himself is doing the contempt of court and abrogating the Constitution.

The five-member bench of the Supreme Court has given an order and no agenda item can be raised except the order of the day. On April 3, their minister had trapped the PM, President and deputy-speaker in abrogation of the constitution. Due to today’s effort, the Speaker is himself involved in these crimes.

Bilawal demanded of the Speaker to follow the court’s orders. The Speaker will himself be disqualified over the contempt of court. This is not the first time in Pakistan that a speaker’s ruling has been thrown by the court. In the past too, a Speaker sitting in the same chair had given a ruling which was then done away with through a suo-moto notice. The court has ordered for the process of April 3 to be completed and voting has to take place.

He said Kaptan is running and in doing so, is committing a contempt of court and abrogating the constitution. If the Speaker wants to be involved in these crimes, it is up to him. “I had warned the PM a long time ago, to be wary of the person who made a speech before me or else he would trap him. The same person has trapped him.”

He said if today’s agenda is not followed, then they should know that the opposition too will not leave, the court is here and we will snatch our constitutional rights. They are compelling the Speaker on violating the constitution and committing the contempt of court through a fake letter. They do not have the courage to listen.

The PPP chairman said the reality is that the majority is with the opposition and Imran has lost his majority. All the foreign conspiracy talk is not included in the agenda. We can debate on it for a 100 days but the voting should be conducted.

“We had decided that when Imran is no longer the selected PM, there would be no objections between us,” he said, however, the Kaptan ran in a cowardly manner and is not here today too. He cannot even present his stance.

Bilawal asks why the foreign minister was not present in the meeting of the National Security Committee that he mentioned himself and why was there no mention of the no-confidence in the minutes of the NSC meeting? An ordinary decision of a demarche being given was made.

He said if a conspiracy was being hatched against Pakistan on March 7 or earlier, then their ‘honour’ should have emerged right then and there along with the proof of their patriotism. They should have asked their allies to not leave them and become a part of a conspiracy.

After the Pakistan National Assembly Speaker said that the House should also hold a discussion on the issue of "international conspiracy", Pakistan Peoples Party (PPP) Chairman Bilawal Bhutto-Zardari asserted that the Supreme Court has passed an order to vote on the no-trust motion against the Prime Minister Imran Khan on Saturday and anything against this order cannot be discussed.