FM calls for assisting Afghanistan to stand on its own feet 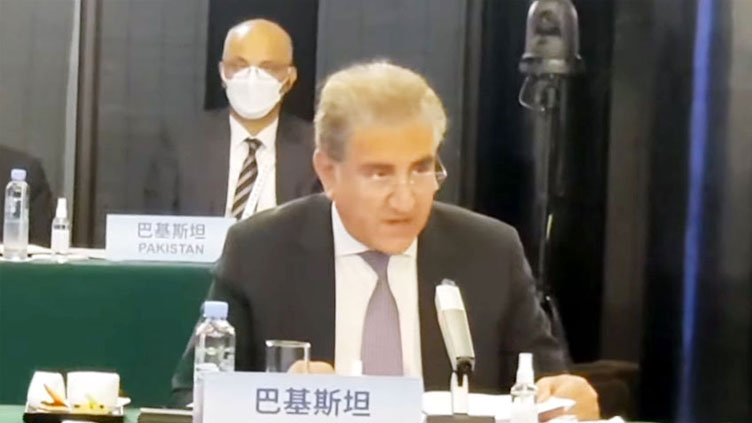 FM calls for assisting Afghanistan to stand on its own feet

Shah Mahmood Qureshi on Thursday has called for assisting Afghanistan to stand on its own feet.

CHINA (Web Desk) - Foreign Minister (FM) Shah Mahmood Qureshi on Thursday has called for assisting Afghanistan to stand on its own feet.

Addressing the third meeting of Neighbouring Countries of Afghanistan in China, FM said there is a historic opportunity after forty years of conflict to finally establish sustainable peace in Afghanistan. The process could be consolidated by working together in a constructive partnership.

Shah Mahmood Qureshi also said beyond the immediate humanitarian question, we need to think of long term economic sustainability and development. The lives of the ordinary Afghans will not improve until the wheels of commerce and industry are allowed to spin.

The Foreign Minister said only a viable and prosperous Afghanistan in the long run will serve as a trade and energy corridor for the entire region. He therefore stressed that promotion of regional connectivity and energy projects in Afghanistan should remain the cherished goals.

He underlined that the frozen Afghan foreign bank reserves belong to the Afghan nation and their utilization should be the sovereign decision of Afghanistan. We will continue to support Afghanistan’s access to its frozen assets so that these precious resources can be utilized for the welfare of Afghans.

Shah Mahmood Qureshi said the lingering question of recognition of the interim Afghan government cannot be left unaddressed for much longer. It is imperative that the international community particularly the neighbouring countries of Afghanistan consider how to move forward on developing consensus on recognition in a phased manner.

The Foreign Minister urged the Afghan authorities to keep taking positive measures including allowing girls’ access to education and promotion of human rights which would help in further promoting international engagement and access to needed financial resources.

On the other hand, the neighboring countries of Afghanistan have announced readiness to provide further humanitarian assistance to the people of Afghanistan.

According to the joint statement issued after Foreign Ministers’ Meeting among the Neighboring Countries of Afghanistan at Tunxi, Anhui Province in China on Thursday, the countries expressed deep concern over the humanitarian situation, economic and livelihood plight in Afghanistan.

The participating parties called on the international community in particular the UN agencies and relevant members of the UN Security Council to step up emergency humanitarian assistance to the people of Afghanistan.

The joint statement urged the countries mainly responsible for the current predicament in Afghanistan to earnestly fulfill commitments on the economic recovery and future development of Afghanistan.

It stressed that a peaceful, stable and prosperous Afghanistan serves the common interests of regional countries and Afghanistan, and expressed readiness to jointly play a constructive role to this end.

They reaffirmed commitment to include Afghanistan in the regional connectivity, energy and transport networks, economic and trade systems, in order to help it unleash its geographical advantages and economic potential.

The parties noted commitments and pledges made by Afghanistan to the international community that the territory of Afghanistan will not pose any threats to the neighboring countries and no place will be given to terrorist groups on the Afghan territory.

They condemned all forms of violence and terrorist attacks, and reiterated that any terrorist organizations must not be given any place on the Afghan territory.

They reaffirmed readiness to strengthen counter-terrorism and security cooperation among neighboring countries and build a united front against terrorism.