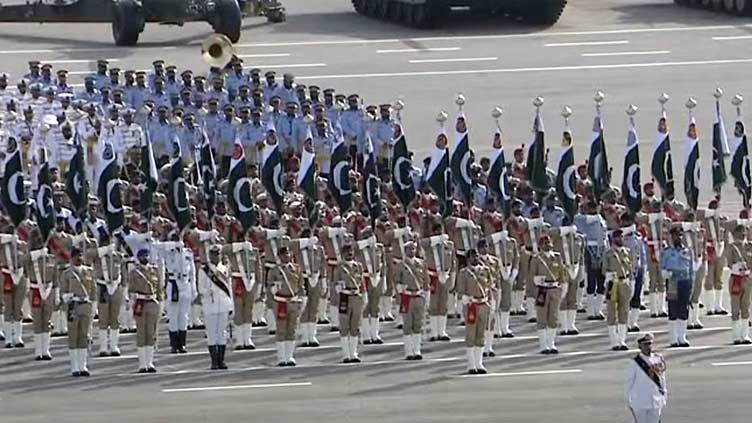 Pakistan Day holds a significant place in the history of the country.

ISLAMABAD (Dunya News) - The nation is celebrating the 82nd Pakistan Day with zeal and fervor today (March 23), with the joint armed forces parade going held in the federal capital to exhibit the country’s military prowess and cultural diversities.

The parade included contingents of the tri-services, paramilitary forces and civil armed forces.

One of the important highlights of the parade was the fly-past of the newly inducted J-10C fighter jets. The J-10C aircrafts, equipped with cutting-edge technology, were inducted into the Pakistan Air Force’s squadron earlier this month.

The dignitaries participating in the 48th Session of the Council of Foreign Ministers of the Organization of Islamic Cooperation also witnessed the Pakistan Day Parade as Guests of Honor.

Pakistan Day holds a significant place in the history of the country. Pakistan Day is celebrated each year on March 23 to mark the passage of the Lahore Resolution that led to the creation of a separate homeland for the Muslims of South Asia in 1947. The historic resolution, known as the Pakistan Resolution, was approved on March 23, 1940.

The National flag has been hoisted at all major government buildings.