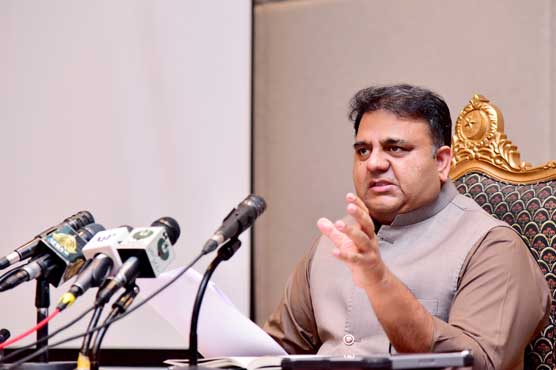 Fawad Ch said that the talks with the opposition should move forward.

ISLAMABAD (Dunya News) – Federal Minister for Information and Broadcasting Fawad Chaudhry while welcoming the opposition’s readiness for talks with the government on electoral reforms said that time should not be wasted.

Addressing a press conference in Islamabad after federal cabinet meeting on Tuesday, he said that electoral reforms are very important and talks with the opposition should move forward.

The minister said Prime Minister Imran Khan has directed Advisor on Parliamentary Affairs Babar Awan and Member National Assembly Ali Muhammad Khan to speak to the opposition, adding that the government is ready to hold dialogues with the opposition on EVMs.

The minister went on to say that federal cabinet was given detailed briefing on Electronic Voting Machines (EVMs) and I-Voting, adding that the government has ordered 20 machines from a private company.

Regarding acquittal of former Punjab CM and Pakistan Muslim League-Nawaz (PML-N) president Shehbaz Sharif and his family members, the information minister said that the people of Pakistan want to recover looted money from the Sharif family and if the case is heard on merit, Shehbaz Sharif would face imprisonment from six months to 25 years.

Fawad further said that Advisor to Prime Minister on Accountability and Interior Mirza Shahzad Akbar has addressed a press conference on the issue, adding that the fake reporting on court decision is a big problem and our IR Unit will file a case on fake reporting.

He said the cabinet has approved that only Central Ruet-e-Hilal Committee is entitled to announce advent of Ramadan, Eid, or other Islamic calendar days as the entire private moon sighting committees are prohibited under the Constitution.

The minister said this decision has been taken on the recommendations of the Ministry of Religious Affairs and Interfaith Harmony.

He said the meeting also approved constitution of a cabinet committee to review the obstacles in the way of constructing high-rise buildings in cities. He said the committee will report the cabinet within two weeks.

Chaudhry said the cabinet also approved the national action plan regarding human rights and business as well as E-visa policy under which citizens of 191 countries can be benefitted.

He said the cabinet approved sending of a medical team to Indonesia to help curb coronavirus.