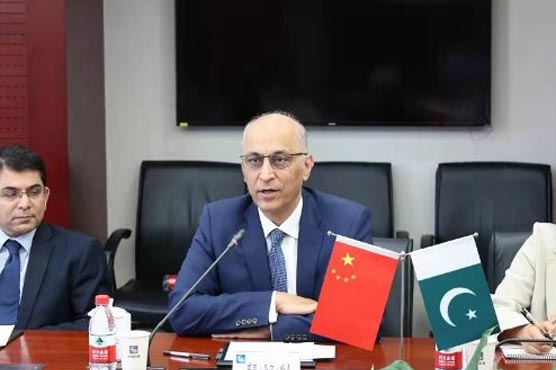 BEIJING (APP) – Pakistan Ambassador to China, Moinul Haque Tuesday said both Pakistan and China wish to see an early political settlement and formation of an inclusive, broad-based, and participatory government in Afghanistan.

The two countries would continue supporting all efforts in that direction, he told Global Times in an exclusive interview.

“There is a need to protect and promote the rights of the people of Afghanistan, particularly women and girls, minorities, and vulnerable groups. Pakistan and China have been calling on the Taliban to respect the rights of all Afghan people. We expect that no country is harmed by terrorist organizations and groups operating in Afghanistan,” he said.

The ambassador said both Pakistan and China are closely monitoring the rapidly evolving situation. First and foremost, it is important to prevent violence in Afghanistan. It is crucial to ensure that a humanitarian situation does not arise.

The people of Afghanistan need support from the international community including food supplies, medicine and COVID vaccines, he added.

Currently, the Pakistani Embassy in Kabul is still functioning normally. The ambassador said the situation is complex with many challenges. The terror attacks near the airport indicated the difficulties of maintaining a diplomatic and consular presence on the ground.

He introduced that the embassy’s diplomatic staff are not only facilitating peaceful political settlement in Afghanistan, but are also helping other countries evacuate their nationals to safety.

“We hope that the Taliban would be able to maintain law and order and prevent terrorist outfits from carrying out further attacks,” he said.

He said to prevent a terrorist spillover from Afghanistan, Pakistan had been taking various steps, including fencing of a porous, 2,600-kilometer long border with Afghanistan and has increased the number of check posts along the border.

“We have completed 90 percent of the fencing and are continuing with patrols along the border. Our security forces remain vigilant and have been conducting various intelligence-based operations against these terrorist elements,” he added.

The ambassador stressed that Pakistan is also concerned about the possibility of a refugee influx. He noted that it is extremely difficult to distinguish terrorists hiding among civilians in case of large movement of people across the border.

The situation in Afghanistan is still unstable with large crowds trying to leave the country.

On Thursday, at least 170 Afghans and 13 US soldiers were killed, and about 200 people wounded in the suicide blast that hit the eastern gate of Hamad Karzai International airport in Kabul. On Sunday,

US military forces carried out an airstrike in Kabul against a suspected ISIS-K vehicle following its drone strike on the terror group in Nangarhar province in eastern Afghanistan on Friday.

US forces left Afghanistan on Monday, meeting the deadline to withdraw forces from the country after a failed 20-year war. As with its irresponsible departure, concerns of the spillover of terrorism are swirling.

Ambassador Haque said Pakistan remains cognizant of the threat posed by terrorist organizations, including TTP, Daesh, ETIM, and others operating from Afghanistan.

According to him, the people of Afghanistan have suffered immensely due to conflict in the country spanning over four decades. After Afghanistan, has Pakistan suffered the most, with over 80,000 casualties and $150 billion in economic losses.

“No country is more desirous of peace in Afghanistan than Pakistan. Similarly, as Afghanistan’s largest neighbor, China also desires a peaceful and stable Afghanistan,” he said.

China and Pakistan have been closely coordinating on the Afghan issue. This month, China’s State Councilor and Foreign Minister Wang Yi had a conversation with Pakistani Foreign Minister Shah Mahmood Qureshi, talking about the latest situation in Afghanistan, including support for the country to fight terrorism, enhancing communication with the Taliban to ensure safety of Chinese and Pakistani personnel and institutions in the country.

He noted that China and Pakistan are also discussing the situation with other regional countries to ensure the maintenance of peace and stability.

Asked about the concrete cooperative plan to fight terrorism between China and Pakistan, Ambassador Haque said the two countries have a robust defense and counter-terrorism cooperation.

“We continue to work through existing mechanisms to build capacities, share intelligence, and coordinate our efforts. In view of the emerging challenges and threats, the two countries would enhance and strengthen the existing cooperation and coordination,” he said.

He praised China as a responsible world power. “China has already expressed its desire to assist the people of Afghanistan with humanitarian assistance and in rebuilding their war-torn country. China has also emerged as the biggest contributor to the global COVID-19 vaccination effort. Afghanistan has one of the lowest vaccination rates in the world, and could benefit from further Chinese assistance,” he said.

When asked about how he witnesses the importance of India’s engagement with the Taliban, he said they expect India to play a positive and constructive role. “In the past, India has acted as a spoiler and worked against peace in Afghanistan,” he said.

“In fact, any effort of the regional countries should be aimed at stabilizing the situation with a view to ease the sufferings of the Afghan people,” he stressed.