Bilawal offers to work with federal govt to combat coronavirus 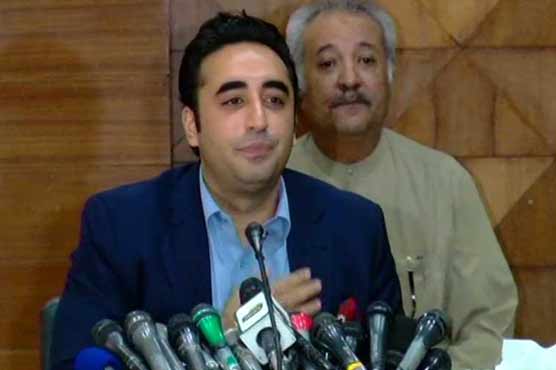 Bilawal offers to work with federal govt to combat coronavirus

The PPP chairman said we must stop criticism, blame and political scoring

KARACHI (Dunya News) – Pakistan Peoples’ Party (PPP) chairman Bilawal Bhutto Zardari on Thursday while declaring novel coronavirus a serious problem said that there is no need to point scoring on the issue.

Addressing a press conference in Karachi on Thursday, he said that the coronavirus a serious problem due to which two people have lost their lives in Pakistan, adding that the virus has a major impact on elderly people.

The PPP chairman said that spreading chaos should be avoided, adding that the Sindh government is trying its utmost efforts to combat against the deadly coronavirus.

Soon after virus broke out in China, Bilawal said Sindh government took measures. He said majority of the cases in Sindh were pilgrims who had returned from Taftan.

Bilawal went on to say that we all have to fight the virus and stand united in these critical times. "We must stop criticism, blame and political scoring," he said and added federal government will have to bring "some changes" in its action plan.

The PPP chairman said that the provincial government will take up the responsibility of providing food supplies to the poor as they self-isolate at home. We will also take care of doctors and nursing staff, he said.

Bilawal further said that we have to fight the current situation with unity, adding that the federal government should help provinces for testing kits.

He said that Pakistan Peoples  Party (PPP) has also cancelled death anniversary of Zulfiqar Ali Bhutto to be held on April 4 amid virus outbreak.

Bilawal said PM Imran Khan will lead them in this challenging time of Coronvirus, adding that there is need to criticize the ruling PTI as it is not time for that.

Sindh government, owing to on-going partial lock-down in the province has decided to distribute 20,00,000 ration bags among the poor to keep their kitchen running.

The chief minister briefed the meeting about the measures he has taken to contain further spread of coronavirus.

" With the closure of malls, restaurants or what it is being termed as partial lock- down we have tried to slow down the spread so that necessary arrangements for establishing Isolation centers and field hospitals could be made accordingly," he explained.

Corps Commander Karachi, Lt. Gen Humayun Aziz appreciated timely efforts of the provincial government and emphasized upon provision of ration to the daily wagers and other poor people so that they continue to meet their food requirement.

Syed Murad Ali Shah said that he had already held a number of meetings with the philanthropists, NGos like Edhi, Saylani and others to seek their help and guidance for preparation of ration bags and development of mechanism to provide ration bags to the needy.

The chief minister and corps commander decided to constitute a committee under Sindh Minister for education and Labour Saeed Ghani with Commissioner Karachi Zulfiqar Shehlwani and Additional Secretary Health Aleem Lashari as its members.

The Corps-5 Brigadier Sami and his two team members would also be part of this committee.

The committee would decide about the contents of and quantity of food items for ration, and then develop a mechanism for their distribution.

A warehouse to store ration bags would be established from where onward supply of the bags all over Sindh would be made. The quality of food items and their quantity as agreed by the committee would be ensured. However, it was decided that the ration bag would have food stuff sufficient to a family for one-month period.

It was also decided that the houses after supply of ration would be marked as `supplied  so that duplication could be avoided. A helpline would also be set up where the deserving people would get themselves registered for ration bags and after necessary verification ration bags would be supplied. The meeting also decided that a 10,000-bed Isolation centre and field hospital would be established in Expo Center Karachi with the support of Corps 5. Commissioner Karachi would coordinate with the Pak Army for the purpose.

In the first phase, one hall of the Expo Center would be converted into Isolation Center and then more halls would be acquired. In the first hall beds, medicines, necessary equipment posting of doctors and para medical staff etc., would be made available.

Sindh Chief Minister said that he has made over 16000 swabs/VTMs and 13000 kits available to test coronavirus infection in the province. "But, we will have to enhance our testing capacity which is limited to only 600," he remarked.