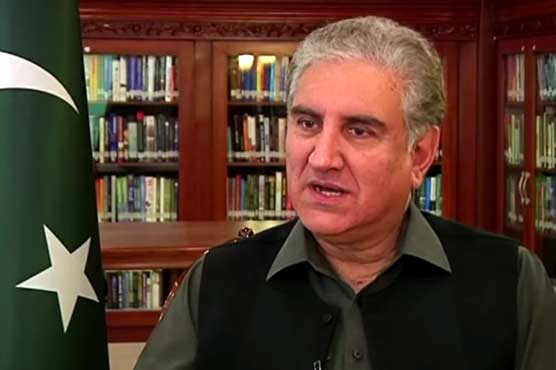 Pakistan had facilitated the accord by persuading both the Taliban and US, said FM Qureshi.

ISLAMABAD (Dunya News) - Any reservations Afghanistan has with Islamabad should be resolved bilaterally rather than involving the United States, Pakistan’s foreign minister said on Sunday, in reference to part of a joint U.S.-Afghan declaration on peace efforts.

The declaration was announced on Saturday by Afghan President Ashraf Ghani, U.S. Defence Secretary Mark Esper and NATO Secretary-General Jens Stoltenberg at a ceremony to coincide with the signing in Doha of an agreement between the Taliban and the United States.

“They should talk directly to Pakistan. The U.S. is planning to withdraw and we will always remain neighbors,” Foreign Minister Shah Mehmood Qureshi told the news agency in an interview, referring to Washington’s intent to withdraw troops from Afghanistan.

“If I have an issue with Afghanistan, I will not ask Washington to play a role.”

He said that the U.S.-Taliban agreement in Doha would never have happened if Pakistan had not convinced everyone that there was no military solution to the 18-year conflict in Afghanistan.

Under it, Washington committed to a full withdrawal in 14 months, and to working with allied international forces to do the same – contingent on the Taliban keeping a pledge to renounce violence and sever ties with militant organizations threatening the United States and its allies.

Qureshi said Pakistan had facilitated the accord by persuading both the Taliban and the United States to find a political settlement, adding that getting both sides to see this had not been easy.

“We convinced the Taliban to put forward an authoritative delegation that has the capacity to implement what they agree upon, and that wouldn’t have happened without Pakistan’s facilitation,” Qureshi said.

Qureshi also said Pakistan played a part in pushing for the negotiation process to restart after U.S. President Donald Trump pulled the plug on negotiations in September last year.