Sharifs' 29 objections against the JIT 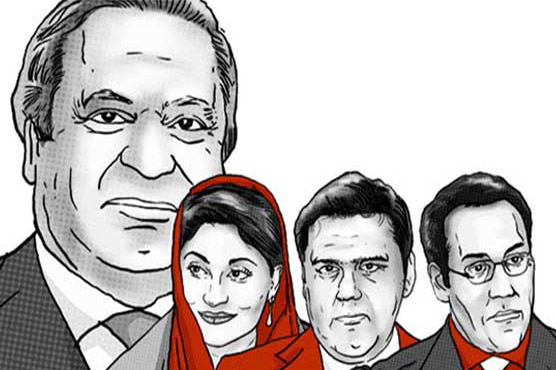 Sharifs' 29 objections against the JIT

(Web Desk) - As the Supreme Court initiated its proceedings after the submission of the report by Joint Investigation Team on Monday, the government filed an exhaustive list of objections to the report while largely claiming that the JIT and its report have been discriminatory.

While political opponents have cited the report as the undoing of the ruling Pakistan Muslim League Nawaz, the government quarters have vehemently objected to both the JIT as well as the report it presented before the Supreme Court. The objections list concerns over various aspects of the report including the legal admissibility of the evidence gathered, the recommendations and ‘analysis’ offered based on its investigations while also claiming that all members of the JIT itself are controversial.

The government has also termed the recommendations of the JIT as discriminatory and based on mere speculation. The detailed objections are listed below:

1. The JIT exceeded the mandate granted by the Supreme Court
2. Most of the JIT report’s contents have little to do with the April 20th order of the Supreme Court.
3. Most of the evidence gathered by the JIT was not shown to or shared with the respondents during questioning with the respondents. Thus, the JIT wasted the state’s valuable time and money.
4. The documents and evidence gathered by the JIT are not legally admissible.
5. The JIT breached its own limits and procured documents and evidence through private companies.
6. The JIT has tried to mislead the Supreme Court by employing Mutual Legal Assistance (MLA) through private companies instead of government channels.
7. The documents procured by the JIT are not certified, authenticated or even signed by witnesses.
8. The London-based law firm used by the JIT is headed by Akhtar Raja, who is a close relative of the JIT’s own Wajid Zia. Raja is also an active political worker of the Pakistan Tehreek-e-Insaf in London.
9. The JIT was supposed to gather evidence, not make recommendations. It was supposed to answer the Supreme Court’s thirteen questions, not conduct analysis.
10. The JIT’s recommendations and suggestions have no legal standing.
11. The JIT’s four claimed findings have no legal standing.
12. The JIT never shared these four major findings with any of the respondents during their questioning.
13. Till the respondents are not shown evidence, findings or claims, they cannot be held responsible.
14. The questioning of the respondents by the JIT was discriminatory.
15. Till the probe and questioning is non-discriminatory, there cannot be a fair trial.
16. A fair trial is a basic right of any respondent/defendant under Article 10(A).
17. The JIT did not record or document important evidence and documents submitted by the respondents.
18. The current JIT report stands incomplete.
19. The JIT took six more days to finish its probe other than the designated sixty days, and cannot be allowed to gather more evidence.
20. The JIT didn’t apprise any of the respondents about the evidence brought on record against them.
21. The Prime Minister was not apprised of any records or charges against him that make him a suspect, or any that prove him to be a suspect.
22. The JIT’s recommendations are discriminatory and not based on solid evidence.
23. The JIT’s recommendations and findings are based on pure speculation.
24. The JIT’s probe is not based on the fundamental principles of law, and actually target and harass the respondents while submitting non-admissible evidence.
25. The JIT tried to impress the court with a false impression that its members’ families are being harassed.
26. All members of the JIT are controversial and tainted:
A) Bilal Rasool belongs to PMLQ
B) Amir Aziz was the Musharraf-appointed investigator in the Hudaibya case.
C) JIT head Wajid Zia used his close relative’s law firm in London.
D) The JIT member from an intelligence agency is a contracted employee.
27. Not making Volume 10 of the JIT report is also controversial.
28. Respondents should be granted full access to Volume 10.
29. Making Mutual Legal Assistance (MLA) documents public will not breach any law.