PARACHINAR (Dunya News) – Just moments after the terrible terror attack in Quetta, two consecutive blasts were heard in Parachinar market, as confirmed by polytechnic officials. The explosion took place in Akbar Khan Siraye Market and it is presumed to be an act of terrorism.

Emergency has been enforced in the regional hospitals of the largest city of the Federally Administered Tribal Areas (FATA). It is believed that the explosions have induced fire in the market. Rescue teams are on their way for help and injured people are being to admitted to local hospitals.

According to latest reports, at least 35 people have lost their lives in the deadly attack while over 60 injured. Security forces have arrived at the area which also has a bus station nearby. The troops of Balochistan Federal Corps (FC) and police are inspecting the market area of Kurram Agency capital. 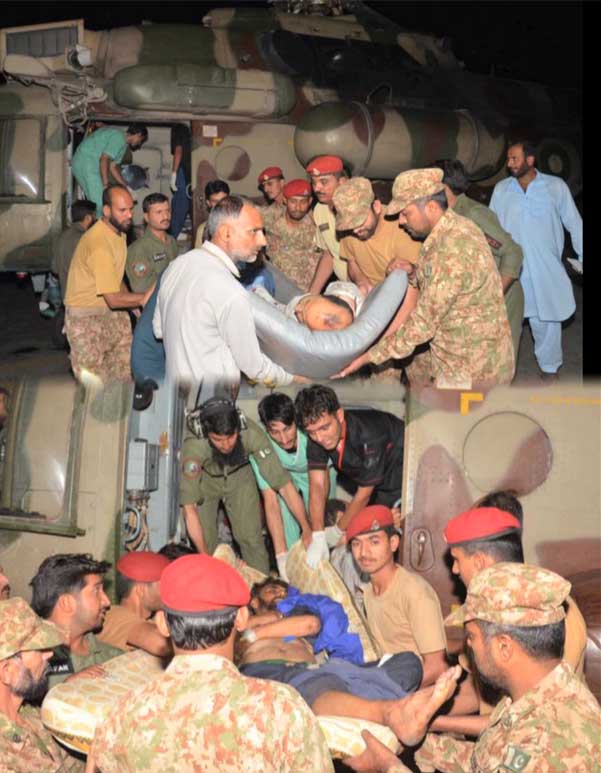 The local residents were busy in Eid-ul-Fitr shopping when the terrorist attack occured. One blast was followed by another after people gathered around with gap of 15 minutes in between, which spread a wave of panic amongst the people. Security forces are conducting a search operation in the market area.

National Assembly lawmaker Sajid Hussain Turi, who belongs from the same area. had an exlusive talk with Dunya News in which he condemned the incident. He told the army officials were quick to respond to the situation and have started the rescue operations. Turi said ambulances, firefighter vehicles and aerial help was being provided in the affected area.

He told the hospitals within FATA are not capable to treat those injured. Turi confirmed the casualties in Parachinar market blast. The region is close to the Pak-Afghan border which was opened after a brief gap some days ago after which two consecutive blasts have occured today.

Interior Minister Chaudhry Nisar Ali Khan expressed grief with families of the victims and condemned the explosions. ISPR sources told helicopters had flew from Peshawar to Parachinar in order to conduct rescue operations in the Kurram Agency capital. ISPR DG Major General Asif Ghafoor said, "Two army aviation helicopters taken off from Peshawar to Parachinar for speedy evacuation of injured to peshawer . Security Forces have cordoned off the area. Rescue operation in progress."

Last March, blast in Parachinar market had spread panic the Kurram Agency area. A large number of people at Noor Market were targeted on a Friday morning, in which several casualties were reported.

At least 13 people including seven policemen lost their lives while 14 others have sustained wounds in a powerful explosion outside Inspector General (IG) office in Quetta. It was later confirmed by the Deputy Commissioner. Those injured were admitted in various hospitals and undergoing medical treatment.

Security alert ahead of Eid

Security has been put on high alert following the terrorist attack in Quetta. Strict security measures have been undertaken on the occasion of Juma-tul-Wida across Lahore and other cities. A security high alert has been issued and more than 7000 security personnel are present at major roads, mosques, and sensitive locations in the provincial capital.

Police have established check posts in various cities to inspect and check the terror threat. The checkpoints are conducting snapchecking while Police Response Units and Dolphin Force have been ordered to perform constant patrolling of sensitive areas.