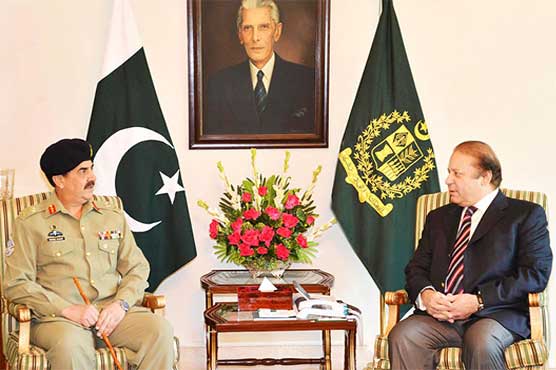 Both also discussed matters relating to Afghanistan’s security and its impact on Pakistan.

The meeting comes a day after General Raheel Sharif chaired a Crops Commanders Conference at the General Headquarters (GHQ) in Rawalpindi).

The forum took an in - depth review of internal security situation and discussed professional matters.

THe meeting also reviewed external security with particular emphasis on situation in Afghanistan and border management issues on Pak-Afg border.

Pak Army launched operation "Zarb-e-Azb" in June 2014 in a bid to wipe out militant bases in the North Waziristan tribal area and so bring an end to the bloody decade-long insurgency that has cost Pakistan thousands of lives.

The army intensified its offensive after last year s Peshawar school attack which killed 151 since when there has been a lull in violence.

Overall levels of violence have dropped dramatically this year, with 2015 on course for the fewest deaths among civilian and security forces since 2007 -- the year the Tehreek-e-Taliban Pakistan (TTP) umbrella group was formed.