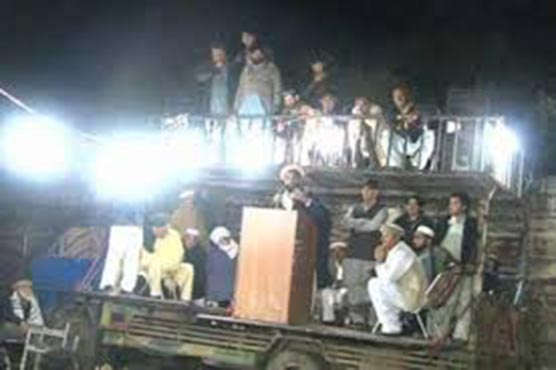 The protesters demanded to resume their posts as early as possible.

While talking to media, the protesters stated that they were fired from the post in 2011 and have not been reappointed despite Supreme Court’s (SC’s) decision.

Earlier, the residents of Karak district have started a demonstration of protest outside Pakistan Tehreek-e-Insaf (PTI) chairman Imran Khan’s house.
The protesters said that the Karak residents do not get water, electricity or gas. The protesters have set up a stage on a mini-container and also danced on different songs as a reminiscer of the PTI’s sit-in at the D-Chowk.

According to the details, the Karak residents have started a demonstration of protest outside Imran Khan’s house in Bani Gala. They said that they would not return unless Khan ensures them provision of basic necessities. They have demanded construction of Khushal Khan Khattak University on rapid pace in the district.

According to the Khattak Union Ittehad, a demonstration of protest is ongoing in Karak for as many as 24 days due to lack of water, electricity and gas. Upon no response from the government, the protesters have shifted the protest to Bani Gala, outside PTI chairman’s residence.
They said that are not willing to return unless Khan ensures them provision of basic necessities.