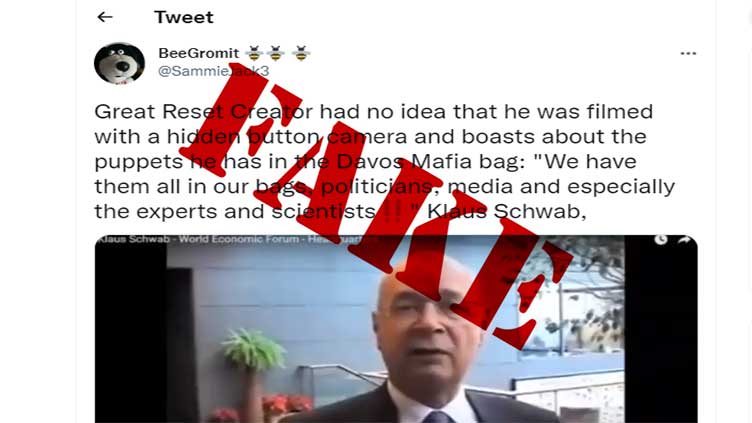 (Reuters) - A 2007 video of World Economic Forum (WEF) founder Klaus Schwab speaking about the WEF stakeholders has been misleadingly described online, with users claiming it shows him being filmed by a “hidden” camera saying they had “them all in our bags” in reference to the stakeholders. The clip, however, shows an extract of an interview that is publicly available on the WEF’s YouTube channel.

The video shows Schwab speaking to an individual who is out of view, likely standing behind the camera.

In the clip shared on social media, Schwab is heard saying: “If I look at our stakeholders, we have business of course as a very important audience and we have politics, we have continuous partnerships with many governments around the world and of course we have NGOs, we have trade unions, we have all those different paths (…) media of course. And very important the experts and scientists and academia, because if we are looking at the future, I think we should look at new solutions, and the new solutions will be very much driven by technological developments (…) we have religious leaders, we have social entrepreneurs, very important social entrepreneurs.”

At no point in the interview did Schwab say the alleged quote attributed to him in recent posts online about having “them all in our bags”.
“Great Reset Creator had no idea that he was filmed with a hidden button camera and boasts about the puppets he has in the Davos Mafia bag: ‘We have them all in our bags, politicians, media and especially the experts and scientists, Klaus Schwab,” reads one tweet with the 49-second clip that has been retweeted at least 7,750 times as of the writing of this article ( here ) ( archive.ph/wip/4MsDG ).

“It’s never been a secret this is no big deal but good to see these hidden cams are pretty good quality,” another one wrote.
Other examples can be seen ( here )( here ).

The clip does not show Schwab being secretly recorded either.

It is part of a 15-minute video viewable ( bit.ly/3NHUIWx ), posted on July 17, 2007, via the official WEF YouTube channel and credited to French entrepreneur Loic Le Meur ( twitter.com/loic ) who Schwab greets at the beginning of the interview. Speaking to the person behind the camera, Schwab states that they are at the headquarters of the WEF in Geneva, Switzerland.

The interviewer is heard asking Schwab a question about what kind of stakeholders work with the WEF (viewable 3:41s) ( bit.ly/3NHUIWx ).

Schwab answers by listing the WEF stakeholders (viewable between timestamp 3:53 and 4:38s) which is the clip currently circulating online ( bit.ly/3NHUIWx ).

Misleading. The clip shows Schwab speaking about the stakeholders at the WEF. He was not filmed by a hidden camera and the full 2007 interview is publicly available via the WEF YouTube channel.