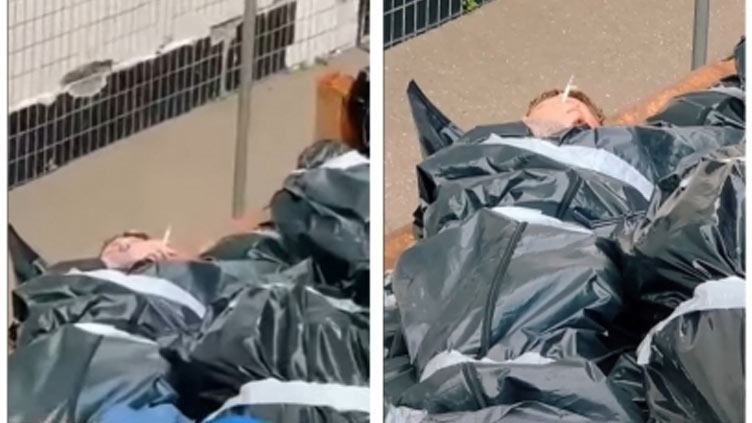 (Reuters) - Social media users are sharing a video of a man smoking surrounded by body bags and claiming events related to Russia’s invasion of Ukraine are being faked.

The text in one post reads: “Miracles in #Ukraine never cease!!! The supposed pile of dead bodies of civilians after an alleged Russian attack. But look one the dead has not managed to kick his smoking habit even in the afterlife!”

In the 12-second clip, a man is laying down with his body inside a black bag and his head and arm outside to smoke. Two other people appear to be arranging the body bags at the back of an orange truck outside a white building.

However, these images are not related to Russia’s 2022 invasion of Ukraine.

The video was posted on TikTok by Vasya Ivanov, who identifies himself as an art director and production designer, on March 28, 2021, with a description translated to “Filming a Husky clip - Never ever #Husky #rapperhusky #backstage #how to shoot #shooting #backstage #recommendations #hochuvrek #rek #husky”.