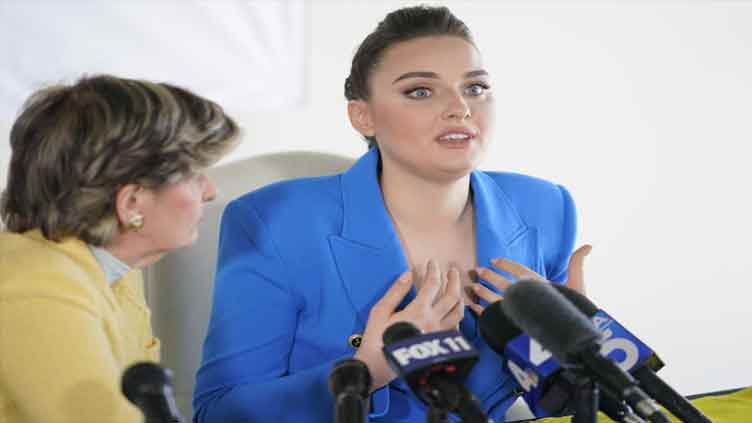 LOS ANGELES (AP) — A former Miss Ukraine winner on Tuesday described her journey with her young son to escape Kyiv and her homeland as Russian troops invaded the country last month, and called on countries to do more to arm her countrymen and women.

Veronika Didusenko, who was crowned Miss Ukraine in 2018, said she and her 7-year-old son were awoken on the first day of the invasion to the sounds of air raid sirens and explosions, and they joined thousands of others on the road to evacuate.

“On my ... journey to the border of Ukraine, there was no place where sirens would not sound, where rockets and bombs would not explode,” she said.

Didusenko told her story at a news conference in the Los Angeles office of women’s rights attorney Gloria Allred, who said she became friends with the former beauty queen several months ago.

Didusenko and her son eventually made it to Moldova and traveled through other European countries before reaching Geneva, Switzerland. Didusenko said she made the “heartbreaking” decision to leave her son there to travel to the United States to hold the press conference with Allred.

Didusenko, dressed in the blue and yellow colors of the Ukrainian flag, said she and Allred decided the situation on the ground in parts of her homeland was an important story to highlight on International Women’s Day.

“Right now, millions of Ukrainian children and their mothers are trembling at every sound in the subway stations and bomb shelters. Even more heartbreaking that women are giving birth in such conditions in these shelters,” Didusenko said.

She said her request to get a visa for her son to travel to the U.S. has been rejected. She plans to return to Geneva this weekend to reunite with him. Allred said she was hoping U.S. officials would relax visa policies to allow more Ukrainians to travel here.

Didusenko said Ukrainians are committed to defending their country, but need more help from other nations.

“Ukrainians absolutely have the courage to defend their land and homes, but in order to stop the endless attack from the east and north, they are in desperate need of weapons and ammunition. We will fight for our freedom and yours.”