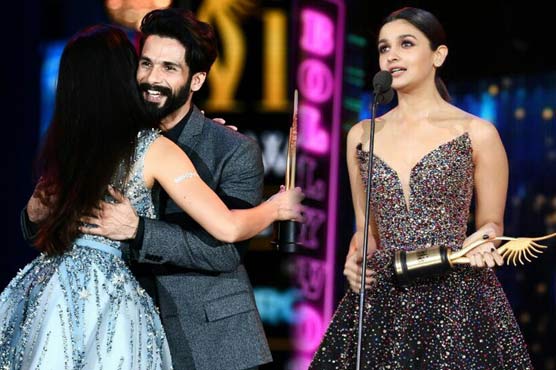 (Web Desk) - 18th annual India International Film Awards (IFFA) were celebrated in New York at Metlife Stadium where both the main leads of Udta Punjab, Shahid Kapoor and Alia Bhatt, were acknowledged for their main leads. They received the award for Best Actors.

Udta Punjab outshined other movies during the event. Diljit Dosanjh was named Best Debut Actor (male) for his appearance in the movie. The film depicting the rise of substance abuse in the country received honour at the ceremony. Both Alia and Shahid were overwhelmed with the recognition as the movie sparked controversy with the censor board.

Alia Bhatt was crowned Best Actor (female) and her award was handed over by her Student of The Year co-star Varun Dhawan. Shahid Kapoor received Best Actor (male) award from Katrina Kaif.

Best Picture title was given to Sonam Kapoor starrer Neerja which depicts real life story of the Indian air hostess who lost her life during plane hijack incident. Best Direction award was given to Pink director Aniruddha Roy Chowdhury.

Other winners at IIFA 2017 include:

IIFA Woman Of The Year