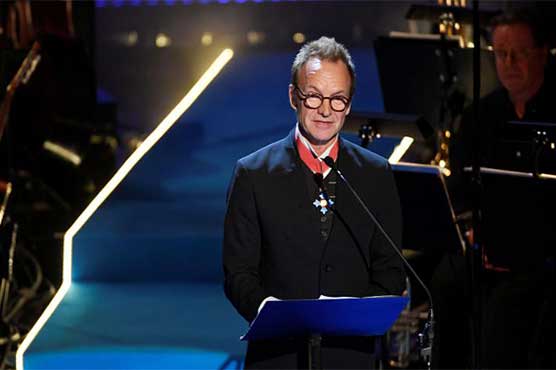 Sting won international recognition as a member of the rock group The Police.

STOCKHOLM (AFP) - British rock star Sting said on Monday he has donated the prize money from a prestigious Swedish music award to a non-profit project which helps young refugees in Sweden integrate through music.

Known for promoting human rights through his music, the 65-year-old singer and US jazz star Wayne Shorter in February won the 2017 Swedish Polar Music Prize, which awards each laureate one million kronor (104,000 euros, $118,000).

"I was deeply honoured to receive this year’s Swedish Polar Music Prize and now, I am delighted to donate the prize money to the Swedish youth initiative Songlines," Sting said in a statement released on the project’s website.

"Music can help build bridges and this project highlights the vital role that music can play in providing young refugees the opportunity to connect with a new society," he added.

The Songlines project involves young asylum seekers mostly from Afghanistan, Eritrea and Syria who have fled war and now stay at refugee shelters in Sweden. The project says it offers them musical activities to help them integrate into society.

"Music is a fantastic tool for integration! Through music, new friendships are formed and language skills are developed," Julia Sandwall, national coordinator for Songlines, said in the statement.

The project will spend the prize money on organising music camps, arranging concerts and buying musical instruments for the young refugees.

Sting won international recognition as a member of the rock group The Police, which released its hit song "Roxanne" in 1979 and "Don’t Stand So Close To Me" the following year.

The Polar Music Prize honours two laureates every year to "celebrate music in all its various forms" and "to break down musical boundaries by bringing together people from all the different worlds of music."