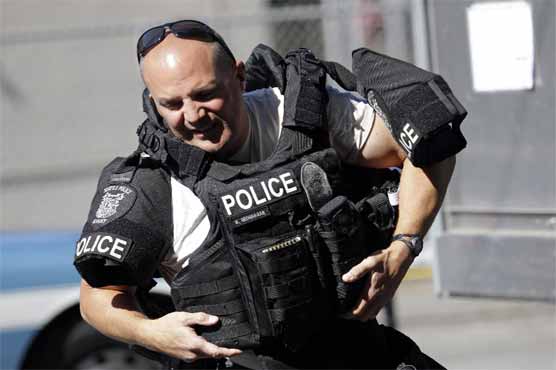 The gunman opened fire in a lobby of a science building on campus of Seattle Pacific University.

LOS ANGELES (AFP) - A gunman killed one person and injured three others Thursday on a college campus in the northwestern US city of Seattle, the latest of what the mayor denounced as America s "epidemic of gun violence."

The most recent bloody rampage to shake the United States came two weeks after an apparently mentally disturbed young man opened fire at a California university and killed six people.

The gunman opened fire in a lobby of a science building on campus of Seattle Pacific University, killing one 19-year-old man and wounding three other people.

"Today should have been a day of celebration at the end of the school year. Instead it s a day of tragedy and of loss," Seattle Mayor Ed Murray told reporters after the shooting.

The injured, including one who was in critical condition, were being treating in hospital, police said.

"Police have one suspect in custody, an adult male who was subdued after being pepper-sprayed by a student security guard," the police statement added.

The gunman was identified as Aaron Ybarra, 26, and he was not a student at the university, the Seattle Post Intelligencer newspaper reported.

He was to make an initial court appearance on Friday on suspicion of murder, it said.

Blake Oliveira, a student, said he was in class when the shooting rang out and first thought it came from a physics experiment. But then he heard screams, the Seattle paper reported.

The 21-year-old grabbed a metal pipe, as he and fellow students were locked in a physics lab.  Oliveira said he heard someone telling others to be calm, and then heard running.

Minutes later, he said, two police officers entered the lab and escorted everyone out. "I took off my sandals put them into my backpack in case I had to run," Oliveira said. "This is all going down. I saw a cop with a shotgun and I thought,

Okay, this is kind of real right now.  And then I saw blood on the floor," the newspaper quoted him as saying.

Police spokesman Chris Fowler described how the young male gunman was taken into custody after opening fire in the lobby of a building on the campus.

He began to reload when a student who was monitoring the building "confronted the shooter (and) was able to subdue the individual," Fowler told reporters.

"Once on the ground, other students jumped on top of them and they were able to pin the shooter to the ground until police arrived."

Less than two weeks ago, a reportedly mentally unstable 22-year-old man killed six people before turning the gun on himself at a college campus in Santa Barbara, California.

School shootings have become a tragic periodic occurrence in the United States in recent years.

They include the December 2012 massacre in Newtown, Connecticut that left 20 small children dead, and the Virginia Tech shooting in April 2007 in which 33 died, including the gunman.