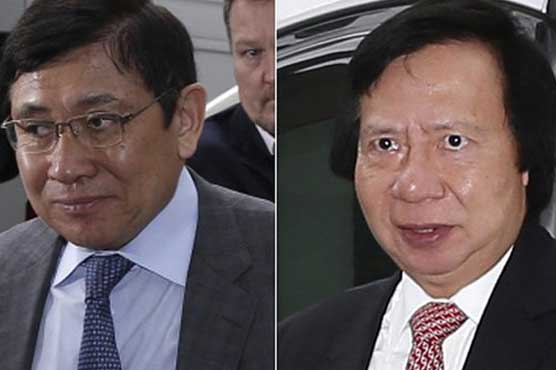 One payment amounting to HK$8.5 million was made to Hui in the four days leading up to his time.

HONG KONG (AFP) - A prosecutor told a corruption trial Thursday that Hong Kong property tycoons Thomas and Raymond Kwok bribed a high-ranking official to be their "eyes and ears" in the government.

David Perry, opening for the prosecution, said the Kwoks, aged 62 and 60, made "secret payments" to Hui, who held the second-highest position in Hong Kong s government from June 2005 to June 2007.

Hui, who was later on the city s top advisory body the Executive Council, is accused of misconduct in office involving bribes amounting to HK$34 million ($4.38 million).

Perry said the payments had been made through a series of "complicated" transactions involving middlemen.

One payment, amounting to HK$8.5 million, was made to Hui in the four days leading up to his appointment as the city s Chief Secretary for Administration in 2005, Perry said.

Another payment, totalling about HK$11 million, was transferred in 2007 in small segments through a series of transactions, involving 10 accounts and an offshore company in Singapore, Perry added.

"Why would such successful businessmen pay millions of dollars in that way to a man to be appointed to office of chief secretary and who was a member of executive council?" Perry asked.

"It was a bribe," he told the nine-member jury panel.

Hui also faces charges over the rent-free use of luxury apartments and acceptance of unsecured loans.

All five have pleaded not guilty.

Perry said Hui had given Hong Kong an impression that he was an "independent and impartial" public servant.

"But he was not," he added, alleging the payments given to Hui were aimed at making him the Kwok s "eyes and ears" in the government to their benefit.

The case has shocked Hong Kong, where Sun Hung Kai is the biggest property developer by market capitalisation and owns some of the city s most recognisable real estate including the 118-floor International Commerce Centre.

The Kwoks were arrested in March 2012 and the High Court trial is expected to last four months.