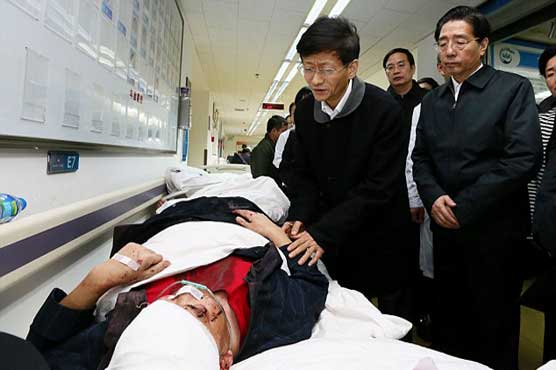 The assault that state media dubbed "China's 9/11" has shocked the nation.

BEIJING (AFP) - Attackers who launched a brutal mass knifing at a Chinese train station acted in desperation after a failed attempt to leave the country and become jihadists overseas, a Chinese official was Wednesday quoted as saying.

Both Beijing and Washington have described Saturday's attack in Kunming which killed 29 people and injured 143 as terrorism. China blames separatists from its restive far-western region of Xinjiang, home to the mainly Muslim Uighur minority.

Qin Guangrong, the Communist Party chief of Yunnan province which includes Kunming, said the eight attackers travelled to his province and Guangdong, which borders Hong Kong, as they tried to leave the country, China Radio International said, in a report that was later deleted from its website.

"These eight individuals originally wanted to join jihad," Qin was quoted as saying.

"They couldn't get out at Yunnan so tried to get out in other places, but they also couldn't leave Guangdong, so once again they returned to Yunnan."

When the group failed to escape through southern Yunnan's Honghe county -- which borders Vietnam -- they hatched the plan to target either the frontier area or Kunming's transport terminals, the report quoted Qin as saying.

His comments had some similarities with an earlier report by US-funded broadcaster Radio Free Asia (RFA), which quoted sources as saying the eight attackers travelled from Xinjiang to Yunnan in order to cross the border into Laos on their way to seek sanctuary elsewhere.

RFA's sources said the eight may have been Uighurs fleeing a police crackdown in Xinjiang's Hotan prefecture.

The sources said they could have given up their attempt to leave after another group of about 30 Uighurs was detained in the border area in September.

It quoted a Uighur in Kunming as saying they may have decided to go on a killing spree to avenge the deaths of others in Xinjiang.

"They were likely reacting to the extra-judicial killings that have occurred about a dozen times last year in Xinjiang," the Uighur was quoted as saying. "Their message to the government was, 'We can do something also'."

The assault that state media dubbed "China's 9/11" has shocked the nation, and led to security being strengthened across the country.

The public security ministry said an eight-strong gang carried out the attack, with three suspects captured Monday and five assailants shot at the scene, four of them fatally.

The vast and resource-rich region of Xinjiang has for years been hit by occasional unrest that authorities blame on Uighurs, saying China faces a violent separatist movement in the area motivated by religious extremism and linked to foreign terrorist groups.

Rights groups say the tensions are driven by cultural oppression, intrusive security measures and an influx of majority Han Chinese, resulting in decades of discrimination and economic inequality.

Beijing insists that its policies in the region have brought prosperity and higher living standards.